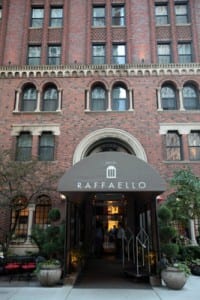 The hotel the bassist died in, from wireimage.com

Former Weezer bassist, Mikey Welsh, was found dead on Saturday in his hotel room at the Raffaello in Chicago, according to a Chicago police spokeswoman.  He was 40.

The cause of death is as of yet unknown.

Hotel personnel found the musician after he failed to check out from the hotel at his scheduled time, according to CNN.

Welsh was a painter before joining Weezer at age 19.  He was with the band when they released “Green Album” in 2001, which featured the song “Hash Pipe,” one of their biggest hits.

The bassist left the band shortly after this album, citing a nervous breakdown as his downfall.

According to his Twitter, Welsh was “in weezer [sic], now I make art.”

Two weeks ago, Welsh sent an eerie tweet from his account saying that he had a dream he died in his sleep in Chicago.  The tweet said, ” dreamt i died in chicago next weekend (heart attack in my sleep). need to write my will today.”  He later said, “correction- the weekend after next.”