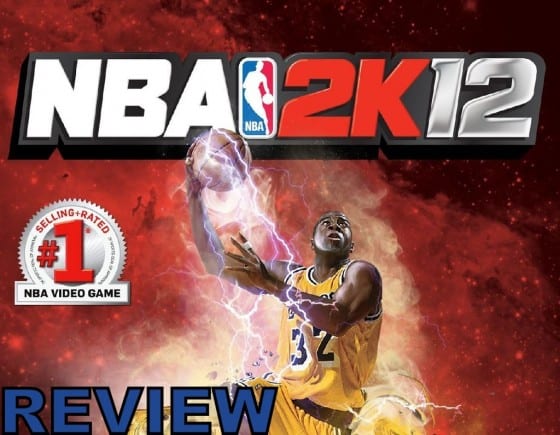 I try not to be too pushy with my reviews and let you readers make up your own minds about which games you’re going to buy, but

there’s really no other way to put this – you need to play NBA 2K11.  Played last year’s game? Doesn’t matter – this year’s game trumps everything that came before it. Don’t like sports games? You’ll appreciate the level of depth and production values that the development team put in the game.  Simply put, NBA 2K12 isn’t just a great sports game, with all it has going for it — it’s a great game in general.

For the second year in a row, 2K spotlights arguably the greatest player to ever grace the hardwood  — his airness Michael Jordan, but this time he’s not alone. 2K12 celebrates the complete history of the sport with players like Larry Bird, Magic Johnson, Patrick Ewing and Scottie Pippen all unlockable and playable.  This opens up an incredibly awesome mechanic in 2K12; the ability to match up the best young stars of today with the greatest of all time. How would Jordan’s Bulls, in their prime match up with the Lakers’ dynasty? This year’s Miami Heat? Or what about a battle of the big-men, pitting an in his prime Shaq against someone like Dwight Howard? It’s here that NBA 2K12 really begins to establish its own identity; if Madden is a sports simulation, this is an all out love letter to a sport, its history and most importantly, its fans.

Of course, NBA 2K12 does not rely on the past, as its real strength, much like in previous years, is in its core mechanics. Most of last year’s game remains intact, but the developers have included little tweaks that make the game better, including addressing the faults from last year’s game. Chief among these faults; at least for most gamers was the AI, which had a reputation for being absurdly cheap, it’s been addressed this go-round, and even though it still happens, it’s much more rare. To the developers credit, they didn’t just dumb down the AI more, instead, they gave you more control; control over your players movement and your offense, but be warned, the AI is incredibly realistic and aggressive and will pounce on any weakness you show.

NBA 2K12 comes packed with a ton of depth, and each is sure to appeal to a different type of player. I for instance am a franchise player, it’s always the first mode I go to in any sports game I play, and in NBA 2K12, it’s incredibly rewarding. Unlike other franchise modes, 2K12’s Association Mode truly puts you in control of a team – through the good times and the bad. Play as a team just coming off a losing season and you’re playing to practically empty arenas, but start winning and watch the fans start to come back in.  For example, I took the Milwaukee Bucks, who had a so-so season last year, and through a series of business decisions, free agent signings and a lot of wins, I was able to turn a good profit.  The coolest addition to this year’s Association Mode is the ability to take it online and complete a whole season.

My Player also returns to this year’s game, and though much of it remains unchanged, it’s a much more streamlined endeavor than in years past.  You’ll still create your player, but instead of dropping in to a few pickup games to prove your worth, you’ll be dropped in to one game and then go into an interview to prove your mental wits and then it’s off to the draft.  Hearing NBA Commissioner David Stern call out your name (if you’ve given him a somewhat normal name), but the real payoff comes from the amount of time and depth you’ll put in to the mode. Your long term goal is to make it to the NBA Hall of Fame, and you’ll do that by reaching goals on both the per-game and season basis.  It’s not an easy task, but a rewarding one none-the-less.

Far and away though, NBA 2K12’s most remarkable feat is in its astounding production values. Of course, there are some hiccups, like some of the lesser known players still having weird alien like faces, but the big names, the Lebrons and the Kobes have all received a face lift and look much more like their real life counterparts.  Even the crowd, an aspect most sports developers have had a hard time with looks remarkably lifelike. The players, and arenas are impressively detailed and everything feels crisp. NBA 2K12 also features what could be the most lifelike commentary of any sports game, as while there is a bit of repetition, still feels remarkably fresh even after countless games.

The Blast Factor: NBA 2K12 isn’t just a great basketball sim, with all of its depth and superb presentation; it’s a phenomenal game in general.  The perfect combination of accessibility and realism, NBA 2K12 tops every basketball game before it – becoming one hell of an experience in the long run. Simply put – it doesn’t get much better than this.