Step out of your room and right onto the beach (Blast staff photo/John M. Guilfoil)

FALMOUTH — You know all those 1950s surf music videos, where people are on the beach, playing volleyball, surfing, drinking from coolers, and generally being best friends with strangers? Yeah, that’s not supposed to happen in real life. Or, if it did, it was something unique to that era, before people in New England began to hate both strangers and local beaches.

So it was easy to go into a newly remodeled Cape Cod beach hotel with a certain amount of skepticism.

Imagine my surprise. Maybe I’ve been too cynical about our local waterfronts.

The Sea Crest Beach Hotel just underwent a $15 million renovation to smartly bring the resort back in time. From the soft, white sand on the beach, to the indoor and outdoor pools, outdoor dining, poolside bar and quaint, comfortable restaurant, the hotel offers a total package that screams vintage Cape Cod.

This is what a Cape vacation is supposed to be. This isn’t rows of tourist traps, awful gift shops and a endless line of Christmas Tree Shops stores. This is summer — or fall in my case — on a private beach, with employees who know your name and room number and bartenders who know what you’re drinking.

The other people staying at the hotel seemed to be taken away just as much as I was. People said hi as they walked by, and we did the same. Strangers held conversations and clanged glasses together.

Even the history of the hotel screams vintage and cool retro. In 1927, a young Henry Fonda, Margaret Sullivan and James Stewart and other beautiful and famous people created a summer playhouse and tea room on Old Silver Beach, where the hotel stands today. It burned down in a 1936 fire and was rebuild as the Old Silver Beach Club, a Prohibition-era speakeasy. It was destroyed in a hurricane two years later and re-built as The Latin Club, a club managed by Lou Walters, the father of Barbara Walters. There was a hiatus during World War II, but the property re-opened as a summer resort.

In 1963, a group led by Boston Celtics owner, the late Red Auerbach, purchased the resort and converted it into a year-round resort in 1971. It was purchased by a real estate venture last year. 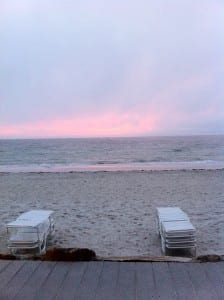 We began our Cape weekend with a visit to the Bourne Scallop Festival, one of many fall events and home to some of the best fried scallops I have ever tasted. There are also a variety of rides, games and local crafts.

We arrived at the resort mid-afternoon. The best rooms at the resort are the ground-floor rooms on the beach. You literally step out of your room, onto the beach. It is perfect for getting lost with a date, a bottle of wine, and a picnic lunch. We did. Hours passed slowly but surely as we let the late September fog roll offshore and the sun come out for one more hot day.

For the fall and winter, when it gets colder, there are a variety of fireplace rooms available. You can walk on the beach during the day and warm up by the fire at night.

Seated at the outdoor bar, I was really taken away by the facade covering the building and the blue and white awnings. I felt like I was much farther than an hour away from home. There is a real understated elegance to the Sea Crest. It’s not a cheap hotel, but it’s by far not the most expensive stay on the Cape, yet you feel like you should be spending a lot more money.

Dinner at Red’s restaurant was nice. It’s not a five-star restaurant, but the entrees are filling, the ambiance is comfortable and the service is great.

Here’s how I have to close the story: The Sea Crest hosts weddings, and even as a guy I can say it would be awesome to get married here.

Step out of your room and right onto the beach (Blast staff photo/John M. Guilfoil)

Who wants to get married here? I do. (Handout)

The view as you arrive (Handout)