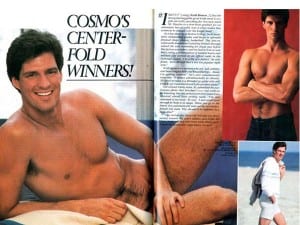 During last week’s Democratic debate, when questioned how she put herself through school, Senate hopeful Elizabeth Warren responded: “I didn’t take my clothes off” (referring, of course, to Scott Brown’s salacious 1982 Cosmopolitan pictorial, the proceeds of which apparently helped him pay for his education at Tufts University). Everyone laughed and all was merry. A couple days later, when asked during an interview by a WZLX disc jockey for a response to Warren’s jab, Brown responded: “Thank God.” Cue the insanity.

Now, Brown’s response could have been taken two ways. He could have meant that it would have been tragic for her to feel the need to pay for her education by offering her body in exchange for money, as many college women seem to be doing nowadays. (On a side note: Watch me grill the CEO of seekingarrangements.com, the “elite sugar daddy site of those seeking mutually beneficial relationships,” in this video (below). I’m the one on the left.)

Or, Brown meant that seeing Elizabeth Warren in the buff would be about as pleasurable as a root canal.

Of course, we all know that he meant the latter, which is why a bunch of women (and men, too, although let’s face it: more women) out there have their panties in a bunch. That sexist pig! Or, in the words of Terry O’Neill, president of National Organization for Women,  as told to Politico: “This is the kind of sexist misogynistic attack that we have very sadly come to expect from politicians whenever there is a strong woman who is capable and really dedicated to the betterment of all the people.”

To which I say: Get your panties out of your ass, unless it’s a thong, which would be physically impossible but you get my drift, and get a sense of humor. Have we as a nation become so unfunny and so beholden to pussyfooting (no pun intended) that we’ve lost our collective sense of humor?

Why do women need to be treated like such delicate flowers, anyway? If the fairer sex can dish it out, shouldn’t we be able to take it? Women have scrutinized and made fun of Governor Chris Christie’s weight, former Senator and all-around deuche John Edwards’ hair, and Senator John Kerry’s (alleged) Botox treatments, to name a few, yet we are incapable of handling a little joke about not wanting to see a 62-year-old woman naked? Frankly, who would?

Actually, me. I would. It would be awesome. If Hef or that guy from Hustler were smart they would capitalize on the hubbub and offer Warren a spread (again, no pun intended), or some enterprising genius should sell a calendar for charity called Babes of the Senate, featuring Warren (should she win the general election) and some of the other ladies currently in office. It would look sort of like this or this, except more awesome.

Besides, women don’t have all that much to complain about nowadays in the area of liberation. We’ve largely achieved equality (although a wage gap still exists, it isn’t as wide as typically reported and may never go away fully — read Kay Hymowitz’s piece); in fact, women have begun to surpass men in a number of areas.

Didn’t we fight tooth and nail all these years for women to be able to celebrate acts like this and this with wild abandon and without stigma attached? And now we’re going to kick up our stilettos over an innocent little barb? One more thing: Not to sound like a 10-year-old, but, like, she started it.

Let’s leave the sexist card out of this one, ladies. Frankly, it’s time for us all to man up a little.