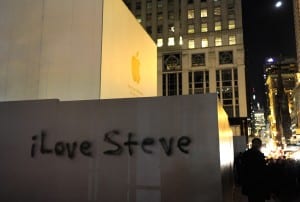 On Wednesday October 5, 2011, the world lost on of its strongest cultural and technological icons when Steve Jobs, former CEO of Apple Computers and definer of this generation’s entertainment media, died at age 56.

Jobs had stepped down as CEO of Apple in August and died a day after Apple had its first major tech demo without him.

Born in San Francisco on February 24, 1955, Jobs began his professional path in an extremely unconventional manner. A college dropout, Jobs attended classes as an audit student at Reed College in Portland, Ore., staying in friends’ dorm rooms and getting free meals at local Krishna temples. After a short time at the college he began working for the pioneering video game company Atari and attended spiritual sessions for the teachings of Neem Karoli Baba in India. He also became interested in the LSD movement that was popular at the time in San Francisco, an event in his life that he rated as an extremely crucial part of his development.

In 1976, along with partners Steve Wozniak and Ronald Wayne, Jobs founded Apple Computers and gave the world a product called the Personal Computer.

Throughout the years, the company assembled and sold computers on an ever rising scale, with Jobs constantly pushing for new and creative people to help make the company more profitable. In 1984, the first national introduction to the company was given in the form of a now-famous Super Bowl commercial inspired by George Orwell’s 1984. The commercial was used to hype the release of the Macintosh Computer, the first commercially successful small computer with a graphical user interface and arguably the launching point of the American home computer revolution.

The years after the Macintosh was introduced would be a strenuous time for Apple, a time earmarked by Jobs’ controversial forced removal from the company.

Not to be kept down, Jobs purchased the video wing of George Lucas’ Lucasfilm in 1986 and created Pixar Animation Studios

“Toy Story” was the first feature-length animated movie created 100 percent by computers. Jobs had, for the first time, given the world a commercially successful mix of computers and pop culture that would go on to define both him and Apple in the years to come.

In 1996, Jobs returned to Apple and began overseeing what would become the revolutionary Mac Operating System and iMac computer. The combination of these two products would pull Apple from a failing computer company to the second highest distributor in the world.

Next came iPod, which revolutionized the way people carried and listened to their music. Portable music played existed before the iPod, but it was Apple’s mix of cutting-edge technology with an intuitive interface that would drive it.

Jobs next tackled the smartphone. Rivals Microsoft and Research in Motion had been creating smartphones for years before Apple would release its iPhone, but it was the iPhone that ushered in the smartphone revolution. Perhaps never before has so much power and so many features been so fun and easy to use before. It was Jobs who made the iPhone an integral part of Generation Y’s lifestyle.

We hardly need to mention what came next: the iPad. Again, tablet computers were around long before the iPad, but it was the iPad that made tablet computing mainstream and sent every hardware competitor rushing to copy it.

Besides being an acclaimed businessman and ambassador for his company, Jobs was also a notable technician, being listed as either primary inventor or co-inventor in 338 US patents or patent applications. He was famous for his hands-on approach to Apple’s management, being personally involved with many of the company’s most successful products.

A statement issued from his family said that he had died “peacefully, surrounded by his family.” Jobs’ announced he developed pancreatic cancer in 2004 and had received a liver transplant in 2009. An official cause of death has not been announced.

Nearly as impressive as his life, the reaction to Jobs’ death has been a worldwide headline. In a time where the Occupy Wall Street movement is in full effect and the recent scandals of major companies have left many corporate personalities painted as villains, Jobs has received unprecedented admiration for his actions as CEO and a large online mourning has been going on since his passing. A massive twitter movement tagged #RIP #SteveJobs has everyone from celebrities to elected officials tweeting their well wishes to Jobs’ family and their thoughts on Jobs’ as an inventor and public persona. Possibly the most notable of these memorial statements is President Barrack Obama observing how many people discovered Jobs’ death through their iPhones: “There may be no greater tribute to Steve’s success than the fact that much of the world learned of his passing on a device he invented.”