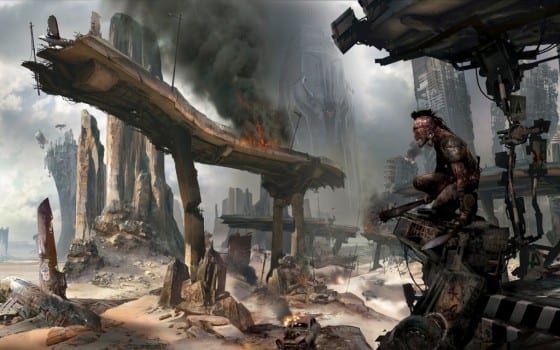 The apocalypse fascinates us. Tales of a grim future of desert wastelands, horrible mutations, and rampant violence have long proven to be a

successful formula for movies, novels, and, especially, games. Id Software’s long-awaited Rage certainly seems to have been crafted with an exacting eye for wasteland standards. It’s a game that definitely succeeds on a technical level, but from a design and gameplay perspective might require players to lower their expectations.

Rage opens in a familiar manner. Just before a giant meteor strikes Earth, a select few are given a reprieve in the form of cryogenic status chambers in protective “Arks”. Fast forward a hundred years, and it’s clear this plan wasn’t bullet proof. The player awakes from cold storage to find themselves the only survivor of their ark, and is immediately thrust into a violent world of dusty landscapes, burned out structures, and well-armed buggies.

Comparisons between Rage and other wasteland games like Borderlands and Fallout 3 are inevitable. How Rage distinguishes itself however, is that it is undoubtedly an Id-made game. There are no role-playing elements here and no greater strategy beyond kill-or-be-killed.Anyone expecting another Fallout will be disappointed by the sheer shallowness of the gameplay.

Rage also lacks the deeper cooperative play experience of Borderlands and the sense of humor of either game. It seems to be a game that takes itself too seriously, even though players will be hard pressed to discern why. There’s no cliché left unturned and despite the initial appearance of an open world, even this is merely an illusion.

Players have no control over even the basics of character development. You can’t change the look, gender, or any physical aspect of the ark survivor, and the only real commodities in the game are money and race tickets. Both of these currencies are used to buy weapons, equipment, ammo, and vehicle parts.

Rage is divided between two distinct play styles. The standard first-person shooting elements will make veteran gamers feel right at home. The indoor levels have a distinct Doom feel to them, with tight corridors and much the same imagery and design techniques used in the developer’s past games. Even the horror elements are cribbed from so many other sci-fi horror games. Despite the apocalyptic mutant theme, the game throws in the whole growing biomass cliché that makes little sense in such an environment.
The driving portions will delight fans of arcade-style combat racing. The physics are over-the-top with an eye for fast action not realism. So, you can still steer in the air, for instance, and there’s a decided focus on making crazy jumps. There’s plenty of opportunity for extra points by destroying objects in mid-air and skillfully dispatching foes.

So long as you understand exactly what kind of game Rage is, however, there’s no denying that it’s fun to play. The whole game is just one errand run after another. Talking to the various non-combative denizens of the wasteland frequently leads to a new task (usually either a fetchin’ or killin’ mission), which you just go and do. It’s not deep, creative, or complex, but this formula provides plenty of action, which has always been Id’s design focus.

Enemies have decent AI and tactics, with excellent movement abilities. Bandits and mutants will use free-running skills to leap over things, run along walls, and be generally hard to hit—frequently too hard to hit, since the game’s auto-assist is suspect. There’s a wide array of bad things to shoot, including some impressively large boss creatures.  Bandits are divided into themed tribes. There are redneck cannibals, technologically-advanced soldiers, and British punk-rocker wannabes. Ultimately, their specific look and dialogue is irrelevant, since outside of the few “safe” towns, everyone is merely fodder for your guns.

Beyond bandits, there’s the so-called “authority” that make life in the wasteland a nightmare for anyone who crosses them. To go along with these tyrannical would-be rulers, there’s also the pre-requisite resistance for the player to join. The story is just there to service the shoot ‘em gameplay though, and it’s clear that the minimum amount of effort was put into the writing and non-shooting and driving mechanics.
Thankfully, as expected, the shooting and driving is satisfyingly entertaining. There are enough missions to occupy hours of violence and, for action lovers, that’s a fine reason to enjoy this romp through the wasteland. The other major draw is the multiplayer, which brings multiplayer car combat front and center.

Id definitely has a handle on great death matching and Rage’s vehicle-centric online play is terrific. Totally ignoring the first-person shooter elements, the competitive play is fast-paced and well-designed. There are a handful of entertaining game modes fought in superb and spacious arenas. The downside of the multiplayer is the four-player limit, which is too small given the expansive scope of the maps. There are also two-player cooperative “legend” missions, which are fun, if shallow, but not really a replacement being able to play the main single-player game with a friend.

Id Software has always been known for their technology, and the latest iteration of their graphics engine takes the core visual style of Doom 3 and expands it to vast open spaces. Despite some graphic glitches on the console versions, Rage is a beautiful game with a solid frame rate and nice variety of indoor levels. The audio is also superb, with powerful surround effects, solid voice acting, and a decent musical score.

Blast Factor: Ultimately, the best way to sum up Rage is shallow, but fun. There’s virtually nothing here that hasn’t been seen before with more depth. Even when the game threatens to evolve beyond its own shallowness, it just can’t make it. Taken as a straight-forward, mission-based shooter, there’s plenty to like. Yet, after so long in development, the game has an almost half-baked feel. The presentation, the environment, the combat… almost all the parts are in place to make Rage an epic post-apocalypse adventure, but the sum total is ultimately less than these pieces.