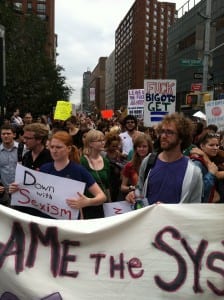 NEW YORK — The word “slut” has long been used to shame women.  Men use it to belittle women and make them feel bad about their sexuality.  Women use it to hurt one another and defend their own reputation.  On Saturday, New York City took the hateful term back for the first time, and unleashed its inner slut.

The first ever New York City Slutwalk flooded the lower east side with people screaming for their rights to sexuality, and in support of rape victim rights.  An estimated 3000 people showed up.

“Slutwalk NYC is part of a worldwide grassroots movement challenging rape culture, victim-blaming and slut-shaming, and working to end sexual and domestic violence,” according to the Slutwalk NYC website.  Slutwalk happens in many major cities across the country.

Slutwalk started with a series of speeches to get the crowd excited, and culminated with the same.  The group gathered in Union Square to listen to speeches about victim blaming and rape culture, all meant to gain awareness and empowerment for victims.

People of all genders and orientations attended the rally that marched from Union Square to Broadway, then down 8th street to 2nd avenue, it continued down 3rd street, and ended by going down Lafayette and back into Union Square. 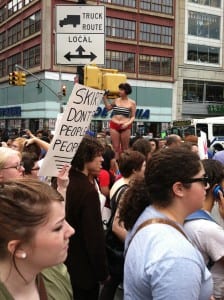 The walkers held signs such as “end sexual violence now,” and “my clothes are not my consent.”  Many dressed like “sluts,” in order to show that the way a person dresses does not mean they are asking to be raped, or want it, which is a common defense of rape culture.

Slutwalk happened just one day after an NYPD officer told women on the street that their skirts were too short, and looked like the kind of women a rapist would target, according to the Wall Street Journal.

The event got its name from a comment a police officer in Toronto when he said, “Women should avoid dressing like sluts in order not to be victimized,” according to Gothamist.

Attendees left the event feeling empowered.  One Slutwalker said that chanting and yelling things like “hey-hey, ho-ho, rape culture has got to go,” made her feel liberated.