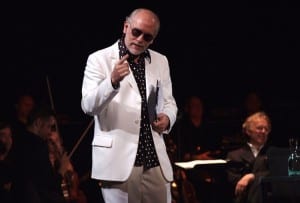 John Malkovich in "The Infernal Comedy: Confessions of a Serial Killer" at ArtsEmerson

A live orchestra emits the final thrums and squeaks of its tune-up. Before it on stage, a table is setup with a pitcher of water, a microphone, and a book from whose cover the unmistakable face of John Malkovich stares into the crowd. Suddenly, the man himself strides out, in a resplendent white suit,  a polka-dot dress shirt, is and white leather shoes. He spreads his arms open wide inviting warm applause. Here he is, the guy you’ve been waiting to see, he seems to be saying, it’s OK to show your excitement.

We’re cheering for Malkovich. That’s what you do when a Hollywood star steps onto stage for the first time in a play. It takes a minute to realize that the man who so confidently solicits our love is a fictional version of Jack Unterweger, the convicted serial killer turned author, journalist and celebrity. With all of the characteristic charm, menace and enigma of the sociopath, Unterweger has been turned loose to sell his new tell-all book to the morbid masses. This is a great move because he’s really a people person.

As far Unterweger is concerned, there’s just one problem. His boob of an editor thought it would be usefully dramatic to embed his tale within an opera. As he speaks, the orchestra behind him will swell up into compositions by Vivaldi, Gluck, Haydn, Mozart, Beethoven, Boccherini and Weber. Two beautiful sopranos will waft in from the wings to sing arias. This is trouble. Unterweger is an emotional guy. He’s not sure he can handle this kind of music. And beautiful women are his weakness.

The construct of “The Infernal Comedy,” is genius. As Unterweger, the self-confessed fabulist, spins and revises his tale and silently toys with the play’s sopranos (Sophie Klubmann and Claire Meghnagi), we know he is also loosely following some kind of script his handlers have written for him, even as he bristles against it. The question at each moment becomes: which script is he following now and to what extent? The tension is electric, alternately hilarious and frightening.

Often, using this many layers of meta-narrative keeps audiences from feeling too much. But it is impossible to shut off one’s heart in the presence of live music as passionate and beautiful as conductor, Martin Haselbock has put together. The arias in particular are exquisite. Writer/director Michael Sturminger’s script is as funny as it is clever. It describes truth in a Wikipedia world as a war of revisions. Joh Malkovich is absolutely in his wheelhouse. He’s transfixing as a creepy, seductive tortured genius. Catch this one of you can.

“The Infernal Comedy: Confessions of a Serial Killer” plays at ArtsEmerson‘s Cutler Majestic Theater through September 30.