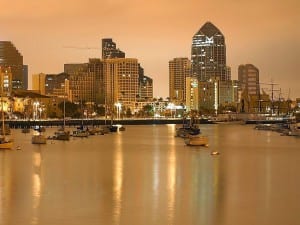 Although it seems like the Real World has been on since the dawn of television, MTV’s reality series is still going and just started a new season.  Last night, Real World San Diego, season 26, premiered with a bang.  The roommates didn’t hold back on the drama.

The cast is comprised of Priscilla, Sam, Ashley, Alexandra, Zach, Nate and Frank.  The episode launched with overtones of discomfort with Sam and Frank’s sexuality: Sam is a lesbian and Frank is bisexual.  Everyone questioned Sam’s gender because she occasionally presents herself in a stereotypically male fashion.  Zach and Nate discussed their qualms with Frank’s sexuality in the confessional, and Nate (who rooms with Frank) said he would freak out if Frank ever brought home a man.

“We’re fending for ourselves here!” Nate said to Zach, in reference to them being the only heterosexual males in the house.

Gender and sexuality seem to be themes that will continue throughout the season and cause tension between the roommates.

Another recurring theme will be Priscilla feeling sorry for herself while sitting at home alone.  She is 19, while the other roommates are over 21.  In the first episode, the roommates took off and went to a bar while Priscilla and Nate stayed behind.  Don’t feel too bad, though, they made out the whole time.  The rest of the roommates love Priscilla, though, because she serves as their designated driver.

The second night in the house, the roommates (except for Priscilla) went to a club, where Frank ran into some trouble.  After he accused some random girls of drinking all his alcohol, they threw some nasty words back at him and he exploded.  The show culminated with Frank crying from rage and loneliness, and professing his love for Alexandra.

This season is going to be a doozy. Stay tuned!