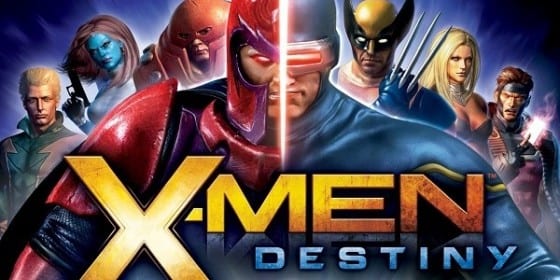 On paper, X-men Destiny sounds like a great idea. The game gives players the ability to take three characters brand new to the mutant

universe, craft them any way they want and allow them to fight alongside (or against) famed mutants like Wolverine,  Cyclops, Gambit and Magneto. Not all ideas pan out like they should.

At times, X-men Destiny flirts with being a decent game, like when it delves deep into the X-men mythos, or lets you play mad mutant scientist by mixing powers and genes of your favorite heroes to create the mutant of your dreams – but it’s all combined with such messy, uninspired at broken mechanics that you’re unlikely to ever experience these things in full. Those who can’t get enough of the X-men should check out Destiny, if just for its fan service; just don’t expect a good game.

The stars of X-men destiny aren’t heroes like Wolverine and Cyclops, but three mutants you’ve never heard of. You take control of one of three characters created specifically for Destiny; Aimi, the mutant smuggled by her parents from Japan to escape incarceration, Grant the jock who knows nothing about the ongoing mutant VS human war and Adrian, the son of an anti-mutant to extremist.  Throughout the game you’ll interact with some of the Marvel universe’s biggest names and play an integral part in the human and mutant war that’s been raging since the death of Professor X. It’s here where X-men Destiny proves that it’s at least in tune with what makes the X-men cannon so unique. The characters origins actually have heart, and each of them (well, maybe not Grant) have a vested interest in the way the battles play out. The game may not portray this 100% of the time, but the game at least makes a valid attempt at giving us a story that fits in with those found in the X-men books on the market.

The beauty of starting with a brand new mutant is that you’ll get to craft them to your liking by finding and combining mutant genes to create a pretty cool arsenal of powers. As you play through Destiny, you’ll earn experience points by exploring, taking out identical no named thugs and even some of Marvel’s most well known mutants, you’ll use this experience to unlock genes, which in turns unlocks new abilities. Want the punishing power of Colossus combined with the speed of someone like Quicksilver? Go for it. Looking to create a badass combination of Wolverine’s berserker rage with Nightcrawler’s teleporting capabilities – you’ll just have to find the right genes. As someone who grew up creating his own X-men characters, I found this to be very intriguing and at times its incredibly rewarding; it’s just a shame that I found myself not caring about it less than halfway through the game.

For all that it has going for it, X-men Destiny falls apart when it comes to its core gameplay mechanics. Rather than fighting meaningful battles, you’ll be taking on a never-ending series of nameless thugs. The result is a boring and uninspired brawler which often feels like nothing more than a grind fest. Now, this would be alright if it were a brawler in the form of previous X-men games like Legends or the later Alliance games, but Destiny is nowhere near the quality of these titles.  Attacks have little or no weight to them and you’ll often get stuck in a sluggish combo that must be completed regardless of if your opponent is finished or not – leading to your character taking unnecessary damage. What’s worse is that these combos often cause the game itself to slowdown.  X-men destiny may present itself as a deep combat game, but it’s really nothing more than a sluggish button masher.

The game also asks you to explore quite often if you’re looking to get more of the mutant genes you’re looking for; but unfortunately, this to tends to drag the game down. Environments are often drab and uninteresting, and exploring becomes something you’ll have to do, rather than something you’ll want to do. At least the genes are hidden pretty much plain site more often than not, so you won’t have to look that hard for them.

The game’s problems don’t stop there as Destiny is an overall thin and unfinished experience. Destiny is a game that shouts its decision engine from the top of mountains, but you’ll find out very soon in the game that these decisions don’t make much of a difference at all. Throughout the game you’ll be asked to choose between two paths, one that aids the X-men and the other that helps Magento’s Brotherhood of Mutants. Making these decisions is supposed to open up new pathways and different missions, but in reality they all play out mostly the same – punch guys in the face and move on. All of this can be wrapped up in as little as 6 hours.

Presentation wise, Destiny is a mixed bag, the voice acting is surprisingly well done, but the rest of the game doesn’t feel as polished. We’ve already touched on the drab environments, but the characters as well feel incredibly awkward and move strangely at times. It’s most disappointing when characters and other elements in the game show up strangely or worse, not at all. These moments don’t happen all that much, but when they do, it’s enough to take you completely out of the game.

The Blast Factor: It’s not all bad though – if there’s one thing that X-men Destiny does right, it’s fan service. Playing through Destiny gives you plenty of different costume choices inspired by your favorite X-men characters. In that sense, there’s a ton of depth to Destiny if you really know where to look for it, it’s just a shame that it couldn’t be found in the game itself. Hardcore X-men fans, who pour of every page of the comics and have a notebooks full of sketches of their own mutant creations will get a kick out of Destiny – just don’t expect it to last too long.