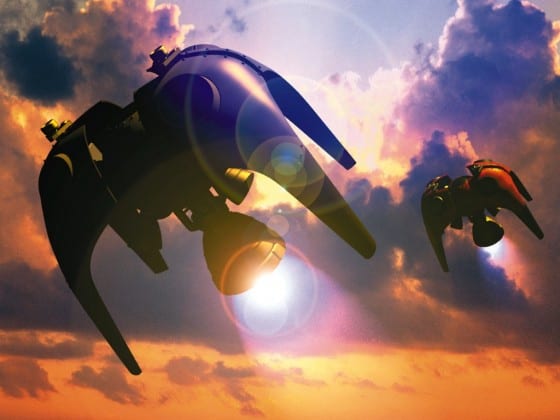 Aged over a decade since its releases in arcades as well as on the Sega Saturn, Radiant Silvergun’s high definition re-release on Xbox Live

Arcade still yields as a frustrating and impossible, yet addicting and challenging “shoot em up” game.

Admittedly, I had never played Radiant Silvergun until trying the re-release on the Xbox Live Arcade, so I had no idea what to expect. I assumed it to be something like an amped up version of Galaga, but I was severely wrong.

The game is definitely not for everyone, and that’s made evidently clear right off the bat.

Starting with weapons that you will stick with throughout the duration of their gaming experience, Silvergun’s story mode drops your ship off in the middle of battle. Enemies all shapes and sizes start flying in weaves and circles, shooting various artillery, hoping to blow you to smithereens. There is no training, and players hit the ground running, scrabbling with the multiple weapons they are equipped with.

The player’s ship is small, but stacked with a healthy variety of goodies to destroy enemies, regardless of their sometimes goliath size. The idea is that each weapon should be used to strategically dispose of specific enemies, and when it comes to boss battles, specific parts of your enemies. The more pieces of bosses you destroy, the larger the bonus is at the end of each stage.

Equipped with a Vulcan gun, as well as a homing laser, a lock-on scanner, diagonal missiles, and a sword, players need to utilize each in different scenarios. Knowing which weapons will be the most useful against which enemies is the goal. Sometimes the homing laser may not be able to hit weak spots on a boss’s body, so the side missiles that leave behind explosions are the route to go. Sometimes a player’s Vulcan gun may be so overpowering all they need to do is just hold down the “A” button and lay waste to everything that crosses through their barrage of death. Each plays a special role in surviving the chaos that ensues through the duration of every stage.

To be completely honest, the word “chaos” may be an understatement.

One hit from any of the enemies’ projectiles will end a player’s life, reducing the life count in the upper left corner of the screen.

And this will happen. A lot.

Ten minutes in I wanted to throw my controller through the television and call it a day due to the massive frustration and tediousness of the levels. But sticking with Silvergun is where the rewards come in. As aggravating as it is to lose all of your ships in just the first phases of level one, the arsenal you use upgrades as you play and, in story mode, continues to level up regardless of death and continues. Your Vulcan gun may be at level five when you run out of lives, but when you save and continue (and begrudgingly start on the very first stage again), the Vulcan gun will still be level five, making play-through more manageable each time. With no power ups or helpful add-ons, players must truly rely on their skills and persistence to level up each weapon. The downside is eventually the first stage becomes a chore as players eagerly (or angrily) grind to pick up where they left off with stronger weapons than before. The repetition can be a bit much. I always found myself yearning for a save function, but only the progress of your weapon upgrades are noted.

Radiant Silvergun is for the determined and strong-willed. Instant gratification gamers need not play, because they will find none here. Only the most patient players will be able to muster through the chaos of weapons that, on occasion, will cover the entire playable screen. And sometimes that won’t even be enough. You’ll grit your teeth. You’ll yell. You’ll probably even contemplate destroying your Xbox. Persistence is the only way to method getting through the story mode, as boss battle after boss battle continuously attempts to beat down players (both in the game and emotionally).

Memorization is key. Players will begin to learn stages due to the amount of times they must be replayed. Silvergun forces players back to stage one with every “game over,” which can leave people zoned out and mindless in front of their televisions for hours just in attempts to get back to where they were prior.

The game offers two modes that players can pick from, “Arcade” and “Story.” Personally, the story mode is a lot more fun, despite the attempt at a story. The arcade mode has different options, however, where players may skip to different stages after they get through stage one. There is no choice in “Story” mode.

The story itself is translated into English subtitles, but still wildly confusing and overall pointless. Subtitles come onto the screen during game play, which makes it impossible to read in attempts to survive the onslaught of enemy fire. In the end, it just becomes annoying. I disregarded trying to understand the reason I was blowing up enemy ships and just went with it, mowing down anything in my path.

Radiant Silvergun offers a multiplayer option as well, which I found, if anything, incredibly amusing. Playing with a friend, we suffered the wrath of Silvergun together, dying left and right, yelling and laughing all the way. Eventually we became numb to defeat and kept plugging away. Playing with a friend definitely eases the pain and aggravation, that’s for sure. Eventually, we got in sync with one another and began covering specific sides of the screen, knowing what to expect and leveling up our weapons, making the game that much better.

It’s clear this is a videogame from a different time, which may say something about present day gaming altogether. It brings up the issue that some games are just too sugarcoated, holding gamers’ hands too long, leading them through things they are perfectly capable of doing on their own. It was a cruel awakening that Silvergun gave me, but I found I quite enjoyed the challenge. Some games are just too easy. Radiant Silvergun loudly boasts back that it refuses to be lumped into such a category. There’s a fine line between challenging and impossible, and Silvergun rides that line perfectly. After my initial shock, my comprehension of this fact led to addiction.

Yes, I still have trouble with the game even on the “very easy” setting (the “very hard” setting is really just another way of saying “yeah, right”), but that’s the point. Silvergun is a game for those who can grind and persevere. I’m a gamer that refuses to back down and this is a game that refuses to give in. I’m sure the game is beatable, but I don’t know if I will ever get to that point. We’ll just have to see as my Vulcan gun and homing lasers get stronger and stronger with each attempt.

The Blast Factor: Radiant Silvergun has shattered my hopes and dreams over and over, but for some reason, I keep coming back for more. And it may be twisted, but I kind of like the close-to-impossible challenge. It’s one of the best arcade shooters of its kind, pushing players to really “want it,” so to speak. The re-release got a nice makeover in HD, making the madness on screen look even better. The multiplayer is just an extra treat so friends can suffer along with you. The grinding can get tedious, however, and one mistake can set players back, which can be too much on occasion. If players truly want to test their ambition and persistence, Radiant Silvergun is worth purchasing off of Xbox Live Arcade. If you’re a gamer that needs instant success, then you may want to drop some quarters at the arcade on it instead of making the long-term buy.