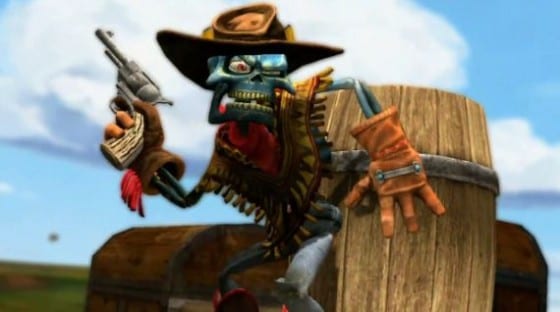 Video games normally take years to plan before they’re even pitched to a publisher — just don’t tell Twisted Pixel that. Twisted Pixel COO Josh Bear recently told Joystiq about how the idea for the Gunstringer, they’re Kinect title staring an undead puppet was thought up in three minutes.

According to Bear, the studio had an idea for a completely separate Kinect game in mind that incorporated precise finger movements, but after playing around with the tech pre-release, they realized that they couldn’t pitch the idea. The only problem? They already had a meeting with a Microsoft representative, and they had to come up with a new idea — and fast.

“Mike [Wilford, CEO]’s kind of chatting with other Microsoft people, and I’m like, frantically looking around the restaurant just trying to think of ideas,” said Bear. “To my left, there was this painting of a skeleton cowboy and I looked at it and just — literally — I was like ‘OK: Skeleton cowboy that needs to get revenge on posse … marionette. F*** it.'”

For a game that started so uniquely, it sure turned into a great title. Read our full review here.