First thought: This is my new favorite baseball movie not named “Sandlot.”

But by the time five minutes had passed, I was delving deeper into my childhood evil dog and PF Flyers pastimes than anyone ever should have.

Written by: Stan Chervin, Steve Zaillian, and Aaron Sorkin, based on “Moneyball: The Art of Winning an Unfair Game’’ by Michael Lewis

“Moneyball” is a masterpiece, but in every imaginable way it is the anti- “Sandlot.”

Where “Sandlot” was a childhood fantasy take on the purity of baseball, “Moneyball” is an adult look at the ugly business side of it.

The 2002 Oakland Athletics made an unlikely baseball run based on the statistical likelihood of their washout players getting on base, scoring runs and ultimately winning games. 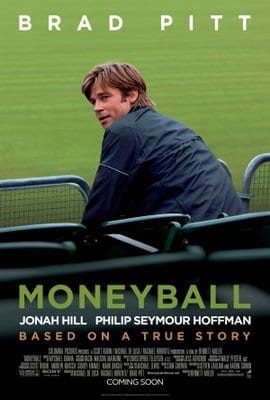 The theory was that a small-market team with a $40 million payroll could complete and even out-duel the nine-figure salaries of the Red Sox and Yankees by picking up players no one else wanted but who had a proven statistical track record for getting on base. Sometimes that meant putting a catcher on first base and hoping for the best.

It half-worked. I won’t ruin the entire movie for you, just in case you aren’t a diehard baseball fan.

The movie is based on Michael Lewis’s 2003 book about the team, and it’s perfectly done with the right balance of humor, pure acting and movie-drama.

Like any good film, the acting makes it. Brad Pitt plays A’s general manager Billy Beane alongside Jonah Hill’s portrayal of real-life assistant Peter Brand, a student of the stats philosophy, known as sabermetrics. The two play off each other like, well like Brad Pitt and whomever he’s acting next to.

Philip Seymour Hoffman also adds something to the film, playing manager Art Howe. There is a particular poignant scene between him and Pitt after Pitt’s character trades away a star player. Definitely worth watching again.

One of the most gripping takeaway points from “Moneyball” is that it ofers a glimpse into the way Major League Baseball treats an aging player who’s hit 35-years-old and lost a step or two. It also shows the dichotomy between the East Coast baseball powerhouses from really Atlanta all the way up to Boston and the smaller markets of nearly everywhere else.

Director Bennett Miller does a good job crafting a sympathetic feeling for both Beane and his merry band of misfit players.

(“Moneyball” also shoes Red Sox fans how we ended up with Kevin Youkilis, by the way.)

The flick is a bit long at 133 minutes, but it’s good enough that you overlook the length. “Moneyball” takes everything that is romantic about baseball and makes it funny, dark and real, while keeping it romantic — like a rocky but steamy relationship. It’s a must-see.