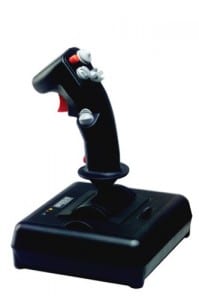 The one I liked the best was the CH Products Fighterstick USB. Long story short, it’s the best joystick ever made. Back then, the 15-pin game port was still the king, though it was lumbering. USB enabled us to easily use multiple devices like throttles, joysticks, and rudder pedals all at once.

The three-axis stick controls aileron, elevator, and throttle control, while the built-in eight-direction HAT lets you control point-of-view or thrust vectoring. It works perfectly in Windows, while rotary trim wheels allow you to fine tune control for older DOS games.

Recently I decided to pull my Fighterstick out of the closet and see if it still worked. It was beat up. Dusty, with some of the rubber casing missing from the USB cable, probably from getting dropped, moved, and boxed for about six years. Well, it still works. I plugged it in, Windows 7 recognized it instantly, and the Fighterstick worked just like it did a decade ago.

Just for kicks, I had CH send me a brand new Fighterstick and see if I could tell any differences. I could not. The X and Y axis of the stick feel and move the same. The Z axis throttle is just as tight on both sticks. All buttons work and feel the same, including the HAT.

After 10 years, the Fighterstick, well out of its two-year warranty, still works perfectly. It works as good as a brand new joystick. For something made of plastic and circuit boards, with tactile buttons, only my Sega Genesis controllers have held up as long. Remember Nintendo 64? How’s that analog stick working? Still making head shots in GoldenEye?

So there’s your testimonial for CH Products. Not bought. Not paid for. Just played with, over and over again.