In his new suspenseful drama, “Drive,” Ryan Gosling plays an unnamed Hollywood stunt driver who dabbles in driving getaway cars during his time off. A man of few words, he lets his unmatched skills behind the wheel do the talking. When the driver tries to use his talents to help a troubled friend clear his last debts, things go horribly wrong and land him in the middle of a violent feud between some of LA’s most dangerous criminals. It takes everything he’s got to stay alive and keep his friend’s widow and son safe from the people who want them all dead.

Over the years, Ryan Gosling has proven his acting chops by portraying an assortment of various characters in roles ranging from a country music-loving football player in “Remember the Titans” to a drug-addicted teacher in “Half Nelson.” With “Drive,” Gosling aims to prove himself as yet 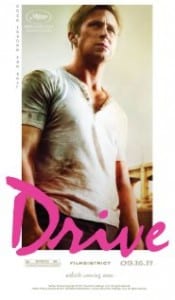 another type of character – the quiet, brooding-but-kind badass, a character who is kind at heart but can bust some skulls if need be. As with all of his previous roles, Gosling hits this one out of the park and easily brings the likes of Steve McQueen and James Dean to mind. When people see this film, guys will want to be him and girls will want to be with him (as if that weren’t the case already).

The rest of the cast holds their own too. Carey Mulligan is as cute as ever as Gosling’s love interest, Ron Perlman (Hellboy, Sons of Anarchy) makes for one frightening bad-guy, and Bryan Cranston phenomenally plays the driver’s mechanic buddy. It doesn’t take long to become completely absorbed in these characters and leave their Hollywood personas behind.

Altogether, the talented cast, killer suspense, riveting story and intense action make for one wild ride that will be spent on the edge of your seat. Without a doubt this is one of the year’s best films that shouldn’t be missed.