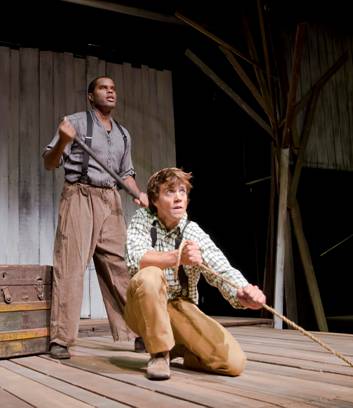 America has always had a strange duality at its core. We tend to identify ourselves as exceptionally moral and civilized, our high standard of living and technological edge proof of our blessedness. At the same time, we think of ourselves as young upstart rebels, rugged individualist pioneers who serve no mortal master. I didn’t really think about this too much when I read The Adventures of Huckleberry Finn as a young child or even when I read it again in college—I rather headed Mark Twain’s notice, “PERSONS attempting to find a motive in this narrative will be prosecuted; persons attempting to find a moral in it will be banished…”

But this was the conflict I saw played out at the Lyric Stage Company in a well-paced creative and thoroughly entertaining staging of the musical version of this adventure tale.  If Huck stays home he has deal with bogus religiosity that seeks to suppress his natural instincts and hamper him with troublesome rules—not to mention justify slavery, but this won’t bother Huck until later. If he runs away, he has to live without protection, from his violent, alcoholic father (who preaches freedom from all government at all costs, or from the talented and unscrupulous hucksters who prop themselves up as the King and the Duke.

While I was looking forward to seeing this story play out again, I have to confess I was skeptical about this format. I have low tolerance for Broadway-style cheese. “Big River” is not too bad of an offender in this regard however. Written by the brilliant Roger Miller, the play’s songs are full of characteristic wit and classic country flavor.

The most dangerous song in the musical is the one given to Jim, the runaway slave, “Free At Last.” The play is guilty of a sometimes-cloying sense of self-congratulation around our hero’s realization that African Americans are indeed full human beings. It could easily be painful to cap this off with a Broadway impression of a 60’s style civil rights anthem. Here, as throughout the production De’lon Grant as Jim is brilliant. He doesn’t belt the anthem, but sings it gently as an almost unthinkable realization that he is trying to let sink in.

As Huckleberry Finn, Jordan Ahnquist is a consistently charming narrator who knows how to hold an audience. He is not, however, as probing or inventive as Grant. Huck should not be quite as scrubbed and frankly, easy to like as Ahnquist plays him. He’s a dangerous kid: irresponsible, rebellious, almost feral. It should be a relief that he turns out to be sensitive rather than a foregone conclusion.

Ahnquist and Grant get a nice assist from scenic designer Janie E. Howland, who not only creates a believable raft for a stage but makes it cruise by projecting a moving scene behind it. It’s one of several clever stage effects that keeps this classic American story rolling.