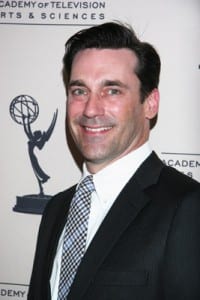 Jon Hamm on the Red Carpet from wireimage.com

The 63rd Primetime Emmy Awards will decide the who’s who of television tonight at 8 p.m.  The Academy of Television Arts and Sciences will honor outstanding actors and actresses, as well as television engineers.

As of right now, the celebrities are making their way down the red carpet and getting ready to take their seats.  Mad Men star Jon Hamm had one of the most anticipated red carpet interviews, but revealed little.  The show is nominated for 19 awards tonight, and is expected to be a big winner.

Stay tuned for the latest from the 2011 Emmys.

8:15 p.m.: Late night hosts Jimmy Kimmel and Fallon wrestle on stage. Yes, they wrestled. Like, on the floor.

8:16: p.m. The first award goes to Julie Bowen from Modern Family for Best Supporting Actress in a Comedy Series.

8:40 p.m. Charlie Sheen takes the stage to present Outstanding Lead Actor in a Comedy Series.  He called it his “old category.” Awkward!  Sheen wished cast of Two and A Half Men cast luck in a surprisingly serious introduction.

8:45 p.m.: Outstanding Lead Actress in a Comedy Series nominees rush the stage in an odd display of excitement…or something like it.

8:47 p.m.: Melissa McCarthy crowned Outstanding Lead Actress. No, seriously, there was a crowning ceremony like a beauty pageant.  Other nominees showed some serious girl love when McCarthy won.  The ladies certainly outdid the boys on this one.

9:02 p.m.: The winner of Outstanding Reality Competition Program is The Amazing Race

9:13 p.m.: Comedy group The Lonely Island just took the stage with none other than Michael Bolton, who is wearing a pirate costume.

9:31 p.m.: Emmy for Outstanding Supporting Actress in a Drama Series goes to Margot Martindale from Justified. In an emotional acceptance speech she said this win was worth the wait.

10:08 p.m.: Outstanding Writing for a Movie, Mini-series, or Drama goes to Julian Fellowes for Downton Abbey.

10:38 p.m.: Kate Winslet won Lead Actress in a Mini-Series or Movie for Mildred Pierce and delivered a genuine speech, thanking her “mum.”

10:47 p.m.: Outstanding Drama Series goes to Mad Men for the fourth season in a row.