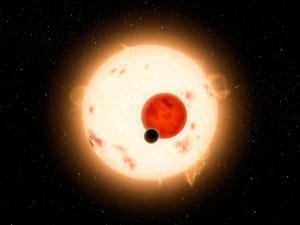 Remember one of the opening scenes from “A New Hope” where Luke kicks the dirt and looks out at Tatooine’s double suns setting in the distance? Well scientists have found a planet that fit the bill.

It was the first time that we Earthlings have observed what is known as a circumbinary planet.

But Kepler-16b is also an oddball because it falls within a radius of the double-star system that scientists thought was too close for a planet to form.

The planet orbits its stars every 229 days.