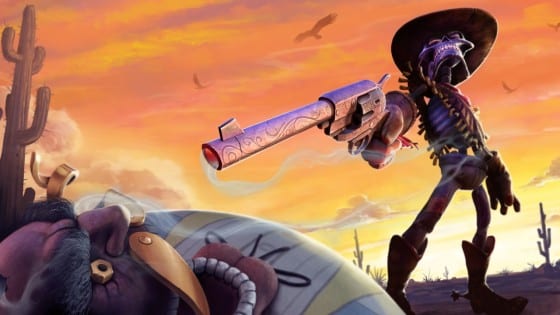 With its fun gameplay and defined art style, Twisted Pixel (‘Splosion Man, The Maw, Comic Jumper) on rails Kinect shooter is like nothing you’ve ever played for Microsoft’s camera peripheral, and could be the first game that will make you forget you’re not using a controller.

The Gunstringer is really a novel idea from start to finish – you control The Gunstringer, an undead Marionette style puppet looking for revenge against his former gang. Yeah, it’s kind of like Kill Bill, but with puppets. The whole thing is done in the style of a play, with a live action audience. Of course, this is a Twisted Pixel game, and the whole thing is filled with the studio’s trademark humor and quirkiness. You can’t help but laugh when you’re shooting holes into one of those arm waving inflatable tube-men used to advertise used car sales. While most Kinect games are light on story to get you to flail you arms around, the Gunstringer brings it in classic Twisted Pixel style.

The game is an on-rails shooter, and you’ll use one hand to control the Gunstringer’s side to side movement, and the other to shoot. It’s a unique control system that given the game’s content works well. You’ll constantly be faced with a ton of enemies at one time, but the game features a “paint to shoot” feature, which allows you to move your hand like cocking a gun to select up to six targets at a time to take out. Think of it like the Kinect version of Red Dead Redemption’s Dead Eye mechanic.  That doesn’t mean things don’t get difficult, as much like previous Twisted Pixel games, things get pretty crazy, and you’ll feel awfully uncoordinated during some of the game’s most hectic sections.

Luckily, the Kinect camera does a mostly great job keeping up with your movements, which makes the game deeply satisfying and fun to play. There are some quirks abound, like one battle that I had to hide behind a rock and then duck out from cover to take out my enemies found my character wildly moving from side to side with even the smallest motion.  There’s also a bit of the disconnect that most Kinect games get between your movements and that of the character on the screen. There’s no doubt though that The Gunstringer is one of the most well performing Kinect games we’ve played. Also, it has a sit-down mode, so don’t expect to break a sweat.

Though you could play through The Gunstringer in mere hours if you really wanted to; there’s a ton of content that you’re going to want to unlock. There’s new skins, photos and items, plus for you daring players – there’s a super challenging hardcore mode that is sure to have you cussing out the team at Twisted Pixel before long.  It’s unlikely you’re going to finish the Gunstringer fully anytime soon.

The Blast Factor: The Gunstringer joins Child of Eden as the must have experiences if you own a Kinect. Here, we finally have an experience that though it’s not perfect, feels like it’s made for motion gaming, and not shoe horned to fit the experience. In short, The Gunstringer is a fun and engaging experience, and that’s something you won’t find in many Kinect games.