Nintendo held a press conference today ahead of this week’s Tokyo Game Show and while there was no news of the highly rumored remodeled 3DS, there was a ton of new announcements. Here’s the rundown:

– Remember that ugly 3DS add-on that we told you about last week? It comes out in Japan on December 10, will work on one AA battery and will cost ¥1,500 (US$19). No word yet on a US release. A slew of new games will also use the peripheral including Capcom’s Resident Evil: Revelations, Konami’s Metal Gear Solid: Snake Eater 3D, Namco Bandai’s Ace Combat 3D Cross Rumble, Tecmo Koei’s Dynasty Warriors VS and Square Enix’s still undated Kingdom Hearts 3D [Dream Drop Distance].

– On October 20, Nintendo will release a new “Misty Pink” 3DS console in Japan to appeal to a more female user base. 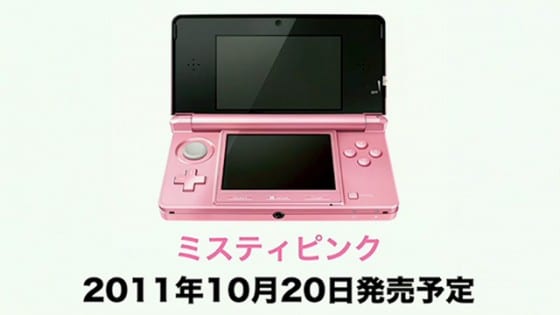 -One of our favorite 3DS games of this year’s E3, Kid Icarus, won’t be making it to retail this year. The original 3DS launch title is now scheduled for sometime in 2012.

– A system update will give the 3DS 3D video capability in November. It will also add more streetpass challenges.

– Zelda: Skyward Sword will be between 50-100 hours of gameplay based on the player.

– By far, the biggest news of the show though was one that’s going to strike Sony’s Japanese success hard — Nintendo has landed Monster Hunter 4 for the 3DS. While it’s not known if it will be an exclusive to the handheld, this has to be a huge blow to Sony, who has been extremely successful in the region with the Monster Hunter series. Check out the concept trailer below.