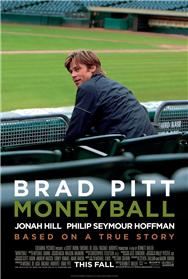 Funny guy Jonah Hill strayed from the norm with his most recent film, Moneyball, a drama about the relationship between business and baseball.

The movie, also starring Brad Pitt and Philip Seymour Hoffman, is based on a book by Michael Lewis about baseball-player-turned-manager, Billy Beane (Brad Pitt) who struggles as the general manager of the Oakland A’s.  Beane hires a nerdy Yale grad with a degree in economics, Peter Brand (Jonah Hill) to employ his innovative idea about player statistics and success. Surprisingly, the new method takes them far, but not too far.

“The movie is about underdogs to me and people who are undervalued,” said Hill.

Although Hill’s character is definitely the underdog, Billy Beane always seems to be the ultimate second best.

Beane just can’t win, despite some valiant efforts.  Jonah Hill unknowingly touched on this subject in a 2007 interview when he said “It’s funny to see people struggle and you don’t buy that Brad Pitt is struggling.   You know that guy could be the most skill-less guy in the world, but if you look like that you will be fine for the rest of your life.”

When asked about this quote, Hill gave a sheepish smile and said, “I eat my idiotic words from when I was 20 and 21-years-old.”

“I just meant…it’s more identifiable to be someone going through shit. It’s a perfect example of why I was wrong,” Hill backtracked. “Brad, in this movie, plays a guy who’s just going through it, and his attractiveness has nothing to do with his character. He’s really just playing a guy you can identify with going through some shit. And it’s a really beautiful performance and its funny and raw. It’s cool.”

And Pitt’s performance is spectacular. Hill matches Pitt’s acting prowess, however, because he was able to make his debut role in a drama. 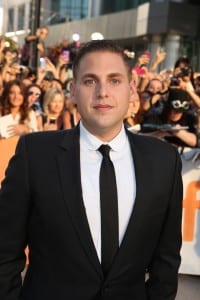 “There are funny moments in the movie…but it comes from a different type of character than I’ve ever done,” Hill explained.  “I am no longer an underdog in the comedy world…with this film, I’m an underdog again.”

Hill said he did a lot of studying for the movie, which included reading the book it was based off of.  He also drew inspiration for the character through his own life. He compared Peter Brand’s analysis of baseball players, which is largely centered on how much money and wins they will bring a team in the long run, to his own analysis of fellow actors.

“We look at a receipt and see how much you’re worth…this is how my friends and I analyze other actors…it’s all dollars.”

In spite of his recent success and major league collaborations, Hill remains humble and enthusiastic.