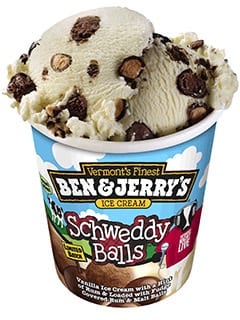 For “Saturday Night Live” fans who have always wanted a taste of the famous Schweddy Balls, you’re in luck! Ben & Jerry’s announced yesterday that it has launched its newest limited edition flavor, Schweddy Balls, which is Fair Trade vanilla ice cream with a hint of rum, fudge-covered rum balls and milk chocolate malt balls. Mmm, balls!

“For a long time, I thought that ‘Here Lies Pete Schweddy’ would end up on my tombstone,” Alec Baldwin said in a press release. “Now, thanks to Ben & Jerry’s, the goodness of the Schweddy family recipe won’t go with me to the great beyond. It is immortalized here, right now, and it’s an ice cream. Ben & Jerry’s and Schweddy. Two great names in American dessert, together at last.”

Former SNL cast member Ana Gasteyer said of the news, “The Schweddy Balls sketch was a personal favorite from my SNL run, so I am pleased as holiday punch that Ben and Jerry’s has taken it upon themselves to share the Schweddy Family recipe with the world. As a person and a performer, I am a sucker for holiday balls. And I have no doubt this ice cream will cause many to scream, ‘Good times.'”

So grab a pint of glistening, creamy Schweddy Balls and watch the premier of SNL’s 37th season on Sept. 24 at 11:30 p.m. We bet your mouth is already watering at the thought of those balls!