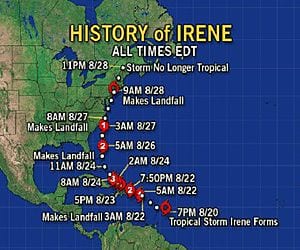 STATE COLLEGE, PA — AccuWeather.com — Although Irene is now history, she won’t be forgotten in the minds of millions of Easterners who dealt with her wrath this past weekend.

At least 21 deaths have been attributed to Irene, which is now barreling across southeastern Canada as a post-tropical storm.

Wind gusts above 100 mph, rainfall totals north of a foot and battering waves that poured ashore along coastlines from Georgia to Maine has left millions, if not billions, of dollars in damage for residents and officials to clean up in the days to come.

It will also take days to restore power, and for swollen rivers to recede to bankfull after swallowing buildings and bridges whole in some communities. Record inland flooding, especially throughout interior New England, will end up being the legacy of this storm.

The Lesser Antilles, Puerto Rico and the Bahamas were the first to feel the wrath of Irene as a hurricane, just two days after forming well east of Guadeloupe.

At the height of the storm, the power was out for more than 1.5 million people in Puerto Rico, with widespread damage prompting President Obama to sign a disaster declaration for the island.

In the Bahamas, estimated 100-mph winds from Irene destroyed 90 percent of homes and structures in the southeastern Acklins and Crooked islands. YouTube videos from Bahamians underscored the need for Americans to prepare.

The first images of Irene’s destruction came as the storm was making landfall in eastern North Carolina early on Saturday morning.

Water from Irene rushed inland along the Pamlico and Ablemarle sounds, leading to more than 200 water rescues from those who chose to stick around and ride out the storm.

Along the Outer Banks, battering waves destroyed at least five portions of Route 12, cutting off Hatteras from the mainland.

Scores of structures suffered at least some wind damage from the storm, with wind gusts above 100 mph recorded.

Excessive rainfall totals were found well inland across North Carolina and north into southeastern Virginia and along the Delmarva Peninsula, flooding out numerous homes and closing roadways.

The megalopolis along I-95 from Washington to New York braced for Irene’s impact, which came later on Saturday and early Sunday.

Public transit ground to a halt in Philadelphia and New York and thousands of flights were canceled as New York’s five major airports shut down.

The combination of soggy ground and strong winds brought down numerous trees over the mid-Atlantic, even as far west as York, Pa., where AccuWeather.com blogger Jesse Ferrell rode out the storm.

Jersey Shore points and even New York City dealt with a storm surge of around 4 feet, including along the boardwalk at Battery Park, N.Y., where the surge coincided with high tide. On Long Island, whole structures were pushed ashore by the force of the water.

Perhaps some of the worst destruction from Irene was felt across interior parts of New England, where excessive runoff from rainfall led to severe flooding.

According to Meteorologist Evan Duffey, at least 10 rivers or creeks were at or above record flood levels from New Jersey to Vermont, with most centered over eastern New York and in the Green Mountain state.

“We’ve seen nothing like this,” said Barbara Sondag, town manager of Wilmington, Vt. Rampaging waters from the Deerfield River were flowing directly through her town as of late on Sunday.

Montpelier, Vt., was also especially hard hit. The Winooski River washed out bridges that connected the town to other areas, while residents across portions of the capital city were told to evacuate.

Forecasts call for major flooding to continue across rivers in the Northeast for days.

When Irene moved ashore near Cape Lookout, N.C., on Saturday at 8:00 a.m. EDT, she became the first hurricane to make landfall in the U.S. since Ike plowed ashore in Galveston, Texas, on Sept. 13, 2008.

A second landfall occurred nearly 24 hours later at Little Egg Inlet, N.J., marking the first time since 1903 a hurricane made a direct landfall along the Jersey Shore.

Even more impressive, the center of Irene, although weaker as a tropical storm, passed directly over New York City, marking the first time that has happened since 1821.

Irene By The Numbers

As Irene tracked north over millions, her impacts were recorded by hundreds or thousands of weather stations. The more impressive stats are available here in a list compiled by AccuWeather.com Meteorologists Cory Mottice and Frank Strait.

The peak wind gust measured from Irene occurred in Cedar Island, N.C., where the anemometer clocked in at 115 mph. Not too far to the west, an unofficial report of 19.00 inches of rain was received from Aurora, N.C.

Of course, even before any rain drops fell from Irene it was already an incredibly wet month across the mid-Atlantic.