We live in a society obsessed with perfecting the human image. These shoes will make you run faster, this drink gives you more stamina and this surgery will irresistible to the opposite sex. The world of Deus Ex: Human Revolution is a futuristic look at where that society is headed, and it’s a grim one.  Competing biotech corporations are augmenting people with new limbs and new senses, but a secret war for these technologies is brewing and innocent lives are being put at risk for this war.

Deus Ex: Human Revolution, the latest chapter in the long running, critic and cult favorite series casts players in the middle of this war and gives them the freedom to decide just how it pans out. Your choices have a tremendous amount of weight and as such, the replay factor is through the roof. Deus Ex is not just a tremendous action game, it’s a gripping and satisfying tale that hits all (well, most) of the right notes to leave you on the edge of your seat.

Human Revolution casts you in the role of Adam Jensen, chief security officer for Sarif Industries, one of the leading Biotechnology companies on the planet. Sarif is on the verge of a major breakthrough, and could unlock the full potential of the human body, but they have their detractors. Not only are their rival companies attempting to steal their information and ideas by any means necessary, they also have a number of “purists” who believe that their work is wrong. On a routine mission, Jensen is attacked and left for dead, leading him to augmented with the company’s own technology.  What results is your quest  to unravel a global conspiracy and find your attackers.

Human Revolution is so gripping because it deals with issues that though they may be a ways off, are very possible in today’s society, but just how deep you dive into the mythos of the game is completely up to you – and that’s where the game truly begins to shine.   A lot of games can claim to give you choices, but very few give you the freedom that Deus Ex offers. Each mission gives you a few basic choices, for instance if you want a weapon to take out enemies from a distance or close-up, but you never feel like the game is guiding you in a certain direction. You’re merely dropped into a mission and asked to complete it in whichever way you prefer. Go through and take out 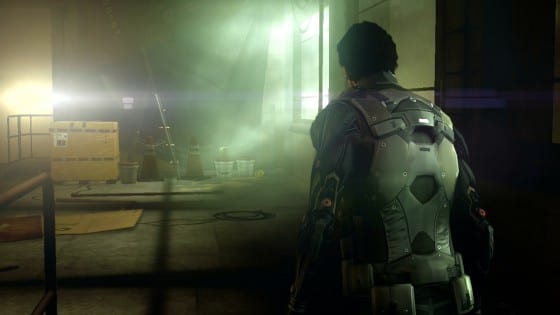 I often found myself going the other route; sneaking around missions and avoiding enemy contact whenever possible. This is where Deus Ex is at its most gripping, enemy AI is astoundingly good, responding to everything from noise to suspicious activity and yes, even unconscious bodies if you don’t hide them well enough. You’ll genuinely have to plan a strategy and think about how you’re going to do things before leaping right in, as getting caught often leads to having to think on the fly, and adopt a new strategy.  The way you play not only has an effect on the game’s missions, but the way the game itself plays out, as certain actions will open up new interactions and side missions that further delve deep into the world of Deus Ex.

There is something to say though for how satisfying and remarkably realistic the game’s gunplay is. Throughout the game (especially if you choose to shoot first and ask questions later), you’ll gain access to a lot of different weapons, and each feels like its weighted right and fun to shoot. It’s incredibly rewarding to take out a room of baddies with a high powered weapon, and the game’s well done cover system adds to it by leaps and bounds.

As you play through Deus Ex, you’ll earn Praxis points, the game’s currency system that you’ll use to level up and earn new abilities. These too have a profound effect on just how you’ll experience the game. I found myself investing them in the blades on my arms, as I found it incredibly rewarding to sneak up on an enemy and take them out this way, but you’re able to distribute them to literally any aspect of your character in an effort to max out your play style of choice. A tip though – no matter how you choose to play, give a significant amount of your points to hacking, as it makes the entire game easier, and opens up a lot of new choices.

For all that it does right; Deus Ex has an unfortunate habit of stopping its own momentum. While the majority of the game is choice driven, there’s a few moments where the game feels remarkably linear, and you can’t help but feel like the game is pushing you in certain directions. A good example of these moments are the game’s boss fights. In a normal game, they’d be sufficient, but when a game is as well done as Deus Ex, they seem out of place and counterproductive to what the game truly wants to do.

Though it’s marred by dated facial animations, the majority of Deus Ex: Human Revolution looks like an art-school dystopia. Heavy on blacks and grays, the game plays the troubled future motif well, and not as predictable as some other games that explore the same theme.  There were multiple times I just found myself staring out a window at the wonderfully rendered cityscape. Human Revolution is one of most unique and cool looking games of this generation.

The Blast Factor: Barring a few missteps, Deus Ex: Human Revolution is a gripping and unique thrill ride that everyone should play.

It’s faith in its mechanics, and play style allows the player an ultimate sense of freedom and the result is a game that you’re not going to want to just experience, but play through again and again. It may not be perfect, but Deus Ex: Human Revolution is a great action romp.