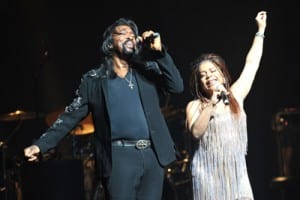 Legendary Motown songwriter Nick Ashford, half of the Ashford & Simpson duo, died Monday according to his former publicist.  He was 70.

He died in a New York City hospital, said publicist and friend Liz Rosenberg.  She cited throat cancer and radiation treatment as the cause.

Ashford was known for songs performed by Motown greats like Diana Ross and Marvin Gaye.  He was responsible for “Ain’t No Mountain High Enough,”  “Reach Out and Touch Sombody’s Hand,” “I’m Every Woman,” and many more.

Ashford also performed songs that he wrote with Simpson, who was his wife, the most widely known is the 1980s hit “Solid as a Rock.”

“His music is unmatched in terms of great songwriting,” Verdine White of Earth, Wind and Fire said after learning of his friend’s death, according to the Las Vegas Review-Journal. “They had magic and that’s what creates those wonderful hits, that magic.  Without those songs, those artists wouldn’t have been able to go to the next level.”

Ashford and Simpson’s success spun off from Ray Charles’ hits “Let’s Go Get Stoned,” that the dup penned.  This hit earned them the attention of Motown Records.

The pair were married for 38 years and together they helped sell millions of records for many artists.  Recently, they co-wrote Amy Winehouse’s “Tears Dry On Their Own.”

“The thing is they were married and working together, that was what was special about them. Everybody admired that,” White said.

In 2002, they were inducted into the Songwriters Hall of Fame.

Ashford is survived by his wife and two daughters.  Funeral arrangements are not yet known, according to Rosenberg.