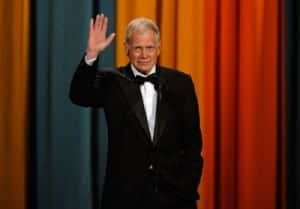 David Letterman uses his sharp tongue to lash back at jihadist death threats from last week.

The late night comedian joked about the threats, although the US Government is taking them seriously.

“Tonight, you people are more, to me, honestly, more than an audience… you’re more like a human shield,” Letterman said to his live audience on Monday night.  He continued by apologizing for being late because he was browsing CBS’s life insurance policy “to see if [he] was covered for jihad.”

The threats from last week were posted on an extremist online forum, and threatened to “cut the tongue of this lowly Jew and shut it forever.”  Letterman, however, is not Jewish.

The posts came mainly in response to Letterman’s jokes about the death of Mohammad Ilyas Kashmiri, the alleged leader of a Kashmiri militant group.

“Kashmiri lasted only a month on the job,” Letterman said in two months ago. ” Alex Rodriguez’s girlfriends last longer than that.”