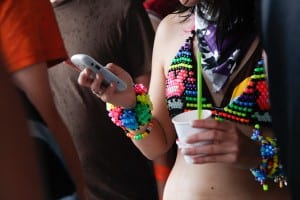 MANSFIELD — We were not expecting a menagerie of neon colors and glow sticks, or all the free Rockstar Energy I could down within nine hours. Nor did I expect tons of underage kids with face paint eagerly awaiting the sound of some wobbly dubstep, or as I refer to it brostep.

At Saturday’s Identity Festival at the Comcast Center, I honestly had no expectations. Identity is the first of it’s kind, the first ever touring festival of all electronic music in America. Identity brings Mansfield and 20 other cities some of the biggest names in electronic music, and from the attendance on Saturday it seems the genre of deep beats and funky sounds is booming with all ages and subcultures.

We arrived around 1:30, just in time to see Modeselktor on the main skullcandy stage. Now we were a bit confused as to why such a great act was so early in the day, but we got let into the pit up close and personal to the action because there wasn’t that many people there yet.

Barefoot and grooving, Modeselktor kept it fresh with more of a techno sound and offered up a perfectly lip-synched performance of “dull flame of desire” by Bjork.

After some time at the main stage we stopped off for $6 Red Bull and searched for the Dim Mak Rockstar stage. The Dim Mak stage was wide-open flat pavement with tons of room for hula hooping and glow stick action. Honestly, festival would have done better to have the main stage in this area, instead of the amphitheater with seating and stairs to trip over. Between these two stages under a patch of trees was the advent stage, formally known as the Beatport stage. Advent was home to underground acts such as Steve Lawler and Manufactured Superstars.

Steve Lawler was by far our favorite set. The British producer and DJ was featured on both the Dim Mak and Advent stages. Both sets were a deep and sexy display of house and techno, way more my flavor. His first set on the Dim Mak stage featured visuals of hot ladies dancing and posing, the second set on Advent was more like the local nights we attend in Boston, low key with a few fans bopping their heads behind the DJ booth.

The two most anticipated acts were Kaskade on the main stage and Steve Aoki on his very own Dim Mak stage. Aoki was way over the top, with a giant LED sign reading AOKI at the base of his set-up. There were points were he spread his arms out covered with sweat like the second coming of Christ. Aoki was comfortable enough to get on a raft and crowd surf while his music kept going. Massachusetts being a state of rock n’ roll, the crowd loved it and carried him along as I danced my butt off in the background.

The main stage was overflowing for Kaskade. We felt miles away from the stage. Though to my surprise the sound was spectacular. The visuals that played on 3 big screens and multiple smaller screens were absolutely stunning, just as epic and out of this world as his music. We had hoped to hear the song Stepping Out, but he stuck more to his newer tracks

I was astonished that the Shadowsphere on the Dim Mak stage seemed quite lonely. Maybe 100 people hung around to watch DJ Shadow while the vendors started packing up their gear.

The overall vibe at the festival was inviting and had no tones of pretentiousness. The best part of identity is that it welcomed all ages. The electronic music scene in local areas is usually restricted to those who are 21+. The whole experience proved that electronic music is continuing to evolve, and with the rise of dubstep out of England, dance music is no longer confined to a 4×4 beat.