If you’re doing well in this economy, and you really want to blow the world away with your audio and video, check out the Marantz SR7005 receiver.

There is simply nothing better on the market right now.

Some people who spend a lot of money on audio/video products will say “no, Denon is better,” but they are essentially the same thing in different cases.

The SR7005 has six HDMI inputs, including one in the front, iPhone/iPod integration/AirPlay receiver, network media (Windows 7 compatible) playing and multiple zones to power speakers in different rooms.

OK so the catch is it’s $1500, but when you figure out that you spend about triple that on speakers, a TV, video game systems, Blu-ray, etc., it gets less scary.

The unit is advertised as a 7.1 system, but I’m very happy using it as a 5.2 system, as it has two subwoofer outputs.

As our friend Kirk Hobbs from South Shore Audio Video Installation points out, if you are going to go 7.1 or increase your speakers in any way, it’s best to start from the front. You don’t necessarily need four speakers behind you. Start with the basic 5.1 system, and add two additional front speakers, set above your first ones. This is especially true if you have high ceilings and are mounting speakers to the wall with the television. 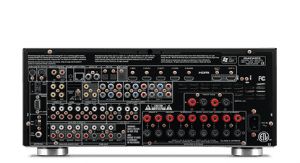 You have plenty of room on the SR7005, because it supports up to 11 speakers in three different zones.

Setup was a breeze. The on-screen menu makes life easier. Plug everything in, then assign the correct names to your devices. Then plug in the included microphone, which automatically starts the speaker setup. Let it run through its paces, and your surround sound will be optimized automatically to the architecture of your room.

AirPlay is certainly one of the best features, especially for iPhone users, you can literally press a few buttons and send music and movies to their television. Windows 7 connectivity adds a similar bonus.

With its network connectivity features, the SR7005 also allows you to access Pandora and similar music services. The only thing I was looking for was Netflix. Perhaps in a future firmware upgrade…

Audio quality blew me away. The unit’s seven discrete, 125 watt amplifiers really do the job. Bass is powerful, high notes are clear with no distortion. Voices sound like they are in the room with you.

The unit is also sized right. It’s no bigger than any other receiver. It fits in your rack or TV cabinet just fine with the cable box and PS3.

If you’re looking for a high-quality choice to focus your home theater around, the SR7005 is right on the money.