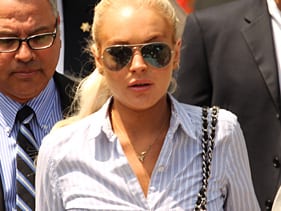 Lindsay Lohan is upset over a lyric in Pitbull’s song “Give Me Everything.” In the song there is a line that states: “I got it locked up like Lindsay Lohan.”

Lohan is suing Pitbull and his producers as well as Ne-Yo and Afrojack, who wrote the song. Her attorney is claiming that the line “by virtue of its wide appeal, condemnation, excoriation, disparaging or defamatory statements by the defendants about the plaintiff are destined to do irreparable harm to the plaintiff.”

The suit is filed under the New York civil-rights laws and is seeking to stop all broadcasting of the song and to receive damages.

The lyric referenced the 13 months Lohan spent in the Los Angeles County Jail for violating her 2007 probation for driving under the influence.