Fans of MTV’s “The Hard Times of RJ Berger” may know Caitlin Crosby as Amy the Tutor. Others may recognize the California-native from various episodes of “That’s So Raven” and “Malcolm in the Middle”, but we know her as a juggler, switching back and forth between making music, acting, and maintaining her passion for pushing teenagers to embrace their flaws and helping homeless families stay off the streets.

Crosby grew up singing in a youth group and musical theater during her younger years. Overcoming her bad case of the nerves on stage assisted in bringing her to where she is now.

“I was always really nervous,” she said in an interview with Blast. “I actually still do get nervous.”

Stage fright has not kept Crosby from singing, especially as she reflects on her first album FLAWZ and her recent project Crosby Skills and Nash, a musical tour with Jay Nash in which the duo took advantage of their famous surnames to spark the interest of music enthusiasts in the Southwestern states.

Crosby described the main message within the music, “It’s about different places that we’re raised in, how it conditions us to see life in a certain way, and not wanting to conform to what the surroundings say is true.”

“Living a Lie,” Crosby’s personal favorite track from the EP, encompasses the idea of finding truth and observing the way people live.

Inspired by Jon Foreman of Switchfoot and Bono of U2, Crosby follows in the footsteps of artists who represent what they stand for as she continues to write lyrics solely based upon personal experiences.

“Every verse is about a different state I’ve been in,” she said. “It’s about painting a picture of the way people in that particular town live and how that mentality is considered normal.”

The lyrics highlight important issues such as racism, whether it’s coming from a mid-west point of view or if it originates from deep within Hollywood. 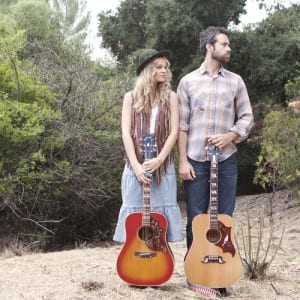 A lack of direction poses as a problem for moving forward within the music industry for Crosby.

She said, “It’s challenging because there’s no formula, but on the positive side it’s wonderful because there is no formula. Different people can find success in new creative ways.”

The musician aspires to write another album in hopes that it will inspire people to help people, but in the meantime Crosby looks to acting when the opportunity presents itself.

“Whenever I need a break from music I go to acting,” Crosby said. “I took a break from music for three years and got offered an indie movie about a singer and songwriter.” Crosby will be starring as Glennis alongside Bug Hall, Spencer Locke, and James Denton in the romantic comedy “Karaoke Man”.

Crosby spoke with enthusiasm about her latest role in “The Hard Times of RJ Berger”.

“I love the cast and crew. I love the character I got to play as well,” she continued. “It was fun to play a tutor and wear glasses and be kind of a bad ass.” Crosby also admitted to her love for Paul Iacono, Mr. Berger himself.

Crosby hopes to work on more film productions, but her busy schedule composed of running her two charity websites The Giving Keys and Love Your Flawz in addition to writing her next album, and attending auditions, hardly allows for the multi-tasker to even sleep.

At this point in time Crosby hasn’t found herself leaning more towards music or acting, but rather towards helping young people with issues like eating disorders and expanding her charity websites.

As she reminisced on her tour with Jason Castro, she said, “It was an amazing experience to meet and talk to all the girls at the merchandise tables and being able to help them through their issues like peer pressure and bullies.”

Crosby said she likes to connect with these younger people one-on-one and help them through their issues. She continues this hospitality with The Giving Keys and Love Your Flawz.

She describes the magic behind The Giving Keys, “I pay homeless people to engrave keys and the profit goes to keep those same homeless people off the street. You can get whatever word you want on the key and on whatever necklace you want.”

On the other hand, Love Your Flawz encourages people of all ages to upload a picture of themselves to Crosby’s photo community holding a sign which depicts a unique flaw of their own that they love. Scrolling across the banner of the website one can see words of wisdom like “Cellulite Happens”, “My Scar Saved My Life”, and “My Flaws Make Me Real”.

For more information on Crosby’s music, acting, and her passion for charity, visit her homepage or check out The Giving Keys and Love Your Flawz.