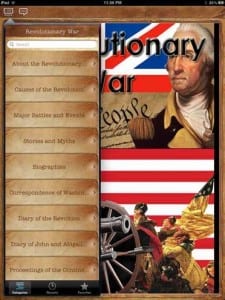 The premise behind this iPad app is very promising and interesting, to get a more rich interaction into a history class and to add more excitement than simply reading a book. While using the app, I pictured a class room full of iPads where the teacher says to play with this app this period instead of using lectures.

Unfortunately this version of the app doesn’t live up to that expectation. There are a lot of videos, but otherwise it’s almost entirely text and pictures offering nothing that a regular text book doesn’t already offer. The videos that they do have, consist of pictures while someone talks, adding little over the text  that consists of the same information.  One such example is they include the poem of Paul Revere both as a video where they show a picture and have someone reciting it, and as the full text of the poem. The app seems to have lacked mentioning the inaccuracies of the poem, such as mentioning the other riders that warned the militia.

They do include one interactive exercise, the NY Battle Simulation. This was a good idea, but needs more polish. The Simulation is very brief on descriptions of the choices, which makes me feel like either you have to know what the expected outcome is or you randomly pick a choice.  If you pick a choice that’s different from what happened in history the simulation simply goes to a page that says “America Loses the War” with a try again button. They should have added more reasoning for why Washington took the actions he did. Information such as the state of the troops at that time, or the number of British and American troops available for the fight, and other troops that could assist in other areas. More important when you picked the wrong answer a description of why it was wrong would be helpful. Would fighting the British there have caused too many loses that they wouldn’t have been able to fight a more important battle later? Would they have likely captured all the troops including Washington?

The try again button points to another major complaint I had in this version of the app; the app has many quality assurance problems. The articles don’t have a consistency in style, the layout of one article will be completely different from another, such as the Title might be in the middle on one and Left Justified on another. There are also spelling mistakes and what looks like errors from a scanner. There are places where they replaced numbers with letters that look similar, Such as, “At z o’clock we bega.1 our march by wading through a very long ford up to our middles. After going a few miles we took 3 or 4 people who were going off to give intelligence.”  There are other places with characters that obviously are wrong, “The letter stated: “the single question then, is whether you consider Boston as now suffering a common cause, and sensibly feel and resent the injury and affront.””

One of the best parts of the app though, is that they included the full text of many important documents and diary entries of people that were relevant to the war. In a book, these documents are usually left out or put in the appendix, because of lack of interest, and the space they take up. In the American Revolution on the Go App they were able to just have a button that linked to the doc, so people could view it easily if they wanted to, or ignore it if they weren’t interested.

One of the developers, Marc Schulman, has stated that they plan “to add by the first week of September a few more interactive activities like the one at the Battle of New York as well a bibliography and of course some fixes for typos”.  I still can see them do some interesting things with more interactive scenarios, but with the version that’s available currently, I would recommend a regular text book over purchasing this app. The app still has interesting promise, but they have a lot of work still to realize that promise.