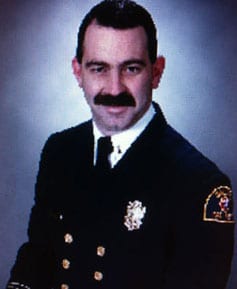 A Dallas firefighter was killed Sunday while battling an apartment fire in southwest Dallas, officials said.

The multiple-alarm fire broke out at the Ridgecrest Apartments at 4:15 p.m. Fire Lieutenant Todd Krodle, a 17-year member of the department, fell through the roof of the building while cutting a ventilation hole.

Krodle, 41, fell to the second floor. His fellow firefighters brought him out, and medics rushed the injured and burned firefighter to Parkland Memorial Hospital, where he later died.

“On behalf of the Dallas City Council and the entire City of Dallas workforce, we express our deepest sympathy to the family, friends and fellow firefighters of this courageous and dedicated firefighter,” said Dallas Mayor Mike Rawlings in a statement. “We must never lose sight that fire service is an extremely dangerous business and this brave man died doing the dangerous job he loved; protecting our citizens and our properties and making our neighborhoods safer for all of us.”

Cutting holes in a roof of a building on fire is a common firefighting task.

The fire was ruled accidental, caused by an electrical short. Reports indicate that no one else was hurt.

WFAA-TV showed what appeared to be amateur video of the mortally wounded firefighter being loaded into an ambulance. Such footage is usually off-limits, but the station apparently did not yet know that Krodle had died, because the story ran with a header “Dallas firefighter injured fighting apartment fire.”