There are two terrific performances in “The Devil’s Double.” The movie itself is a flawed creation, chronicling the life of Latif Yahia, who in the late 80s and early 90s worked as a body double to Saddam Hussein’s son Uday. It’s messy and undisciplined, with poor editing and poorer production values. But even though the movie itself is sub-par, these two performances are possibly two of the greatest performances of the year.

It’s even more of a trick when you realize that the two performances are played by the same man.

Dominic Cooper, who plays both Uday and his double Latif, has been making his way into my heart for a few years now. In every film I’ve seen him in (“The Duchess”, “Mamma Mia”, and, most recently, “Captain America”) Cooper seems to sidle into the frame and, with a flick of his gimlet eyes, make everyone else in the scene surrender. Latif and Uday’s similarities end in their appearance. Most people who see “The Devil’s Double” will talk about Cooper’s portrayal of Uday, the younger son of Saddam, with minimal responsibility and vast amount of wealth. He was also a psychopath, with a penchant for shooting his gun in fabulous Baghdad nightclubs and stealing headscarf-clad Iraqi schoolgirls off the street. His Uday is like what Jack Nicholson’s Uday would be if he had the bone structure. But Cooper’s role as somber, desperate Latif is just as fascinating and nuanced, all the more accented by his vicious alter-ego. When Uday first approached Latif the Iran-Iaq War veteran declined. He re-thought it after Uday threw It’s a tour de force performance in every definition of the phrase. This is not a story of seduction to the dark side. Uday is clearly insane, and the second Latif seems enamored with any part of Uday’s life, the prince does something like eviscerate someone who’s offended him or rape a bride on her wedding day, and puts a damper on his view of the lifestyle. 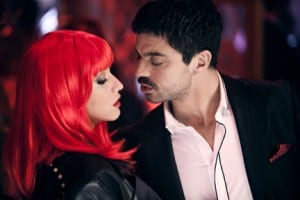 Some of the movie has the same thoughtfulness as Cooper’s role. In the scenes in Uday’s compound and in the Baghdad clubs, everything is gilded and sparkling and utterly, terribly false. It reads less like a docudrama and more like an extended rap video with a true sense of the meaninglessness of the things it’s portraying.

It’s such a shame, then, that the rest of the movie is a bit of a mess. Side plotlines get dropped in the shuffle, entire characters are abandoned at their posts, motives are not clearly explained. The final third of the movie is awash in what I like to call the “And Then” Disease (and then Latif went to Malta, and then he went back to confront Uday, and then…). And the composition of shots, until then so beautiful and meticulous, become unfocused and shaky, relying on the hand-held camera technique that should have been permanently banned about four years ago. Somewhere along the way, the movie turns cold and distant. By the final, bloody climax in a Baghdad marketplace (most likely a very fictionalized account) we’ve completely lost interest.

I fear Cooper might be ignored come Oscar season- the movie was released a bit too early in the year, and besides a showing at the local art houses I’ve heard next to no buzz about “The Devil’s Double.” But if there’s anyone who deserves at least a tip of the hat from the Academy, it’s this young talent. Cooper took a mediocre movie and made it splendid to look at. I can’t wait to see what he does next.