On Monday, the Kings of Leon canceled the rest of their summer tour due to lead singer Caleb Followill suffering from exhaustion; however, band members suggest otherwise. As a result, the upcoming August 26 show in Tinley Park, Illinois at the First Midwest Bank Amphitheatre was canceled. 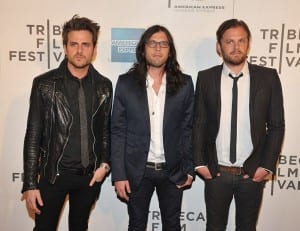 Jared Followill, Nathan Followill, and Caleb Followill at the premiere of "Talihina Sky: The Story Of Kings Of Leon" during the 10th annual Tribeca Film Festival at BMCC Tribeca PAC on April 21, 2011 in New York City. (WireImage)

The band also had to cut their Dallas concert on Friday short after Followill exited the stage saying, “I have no voice. . . I have no idea what’s going on. . . I’m gonna go backstage and I’m gonna vomit.”  Caleb never returned. Fans booed while the band apologized, “I know you guys hate us. . . but we will be back as soon as possible.”

Bassist Jared Followill, Caleb’s brother, Tweeted after the show, “There are internal sicknesses & problems that have needed to be addressed.”  The next day he posted, “There are problems in our band bigger than not drinking enough Gatorade.”

A spokesman for Live Nation defends the lead singer, saying he is “suffering from vocal issues and exhaustion.”

Live Nation say tickets will be refunded automatically if they were purchased online or via phone as well as point of purchase.

Unfortunately, US dates cannot be rescheduled without conflicting with the band’s international tour. In Vancouver, the Kings of Leon will continue their tour starting on September 28.

The band also reassures fans that they are not breaking up. Drummer Nathan Followill tweeted, “Bummed about the tour not happening. So sorry 4 all the fans. We just need some rest. Thanks 4 understanding. WE ARE NOT BREAKING UP!”

“Sex on Fire” and “Somebody” were the band’s hit singles in 2008. Their fourth album, “Only by the Night,” was one of the best selling rock albums. “Come Around Sundown,” their newest album, did not receive the same recognition.