I had such hopes for this movie. Really, I did. I thought, hey, something big and silly and infused with self-awareness. Perhaps Jon Favreau is the new pastiche-king, the new Tarantino, the new master of male-centric camp! Perhaps the steampunk aliens want to blow up lots of hastily constructed Western town sets! Wouldn’t that be lovely?

It sure would have been. Which is why it’s so disappointing that “Cowboys and Aliens” doesn’t fail because it’s too stupid, it fails because it tries to be too smart. Enamored with its concept, it riddles the writing, the cast, and the entire design with Western and sci-fi film cliché and in the end topples under the weight of its own over-confidence.

There are six- count ’em- six writers who worked on this movie. And for what? The story is a Man With No Name (Daniel Craig) who wakes up in the desert with a bizarre mechanism strapped to his arm and no memory of who he is. He wanders back to a town that is literally called Absolution, complete with a meek bartender/doctor (Sam Rockwell), a preacher-man with a salty mouth (Clancy Brown, and the most likeable character in the bunch) and the local wealthy cattle rancher (Harrison Ford). No Name discovers that he’s a criminal named Jake, but before the feds can cart him away, the town is attacked by mysterious flying machines that steal people away using- really- steel lassos. The only person who seems to know anything about them is the mysterious Ella (Olivia Wilde) who seems to think “mysterious” can be conveyed by gaping your mouth open like a fish and staring at the sky.

The movie isn’t poor technically- in terms of camera work, editing, and styling it’s perfectly competent. Favreau makes excellent use of the natural scenery and everyone looks terrific, lit so the details on the spurs and prairie dresses glimmer as brightly as Craig’s pretty, pretty blue eyes. And the “Iron Man” director has a serious pop-culture literacy, which I suppose counts for something. 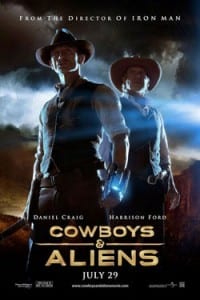 But somewhere along the way the writers decided that just making a Western blended with a B-sci-fi flick wasn’t enough. They had to throw in an adorable child, an adorable mutt, father/son relationship pathology and fierce yet noble Native Americans who can cure amnesia with chanting. They throw this all in, and the kitchen sink too, but include not an ounce of irony, fun or good humor. Somewhere along the way someone started taking this movie seriously, which basically killed it where it stood.

The one moment of clarity comes when they discover the reason of the aliens’ attack on Earth (spoiler ahead.).

I’m serious. They want gold. And there is a much-needed release when Ford, scowling through his leather-mitt face, looks incredulously at Craig and exclaims, “Gold?! Well what are they going to do- buy something?!!” The line is much funnier than it has any right to be, because it’s the first time in the whole movie that someone stands up and says, “This whole concept is insane! Why are we acting so dour? For God’s sake can someone just take in for a second that this movie is called ‘Cowboys and Aliens’?!”

But then the moment passes, and there’s a weirdly bloodless action scene between the aliens and the cowboys, and Olivia Wilde sacrifices herself for the greater good, and all is well in the town named Absolution, where the Man With No Name finds…oh, whatever. But I wonder what would have happened if one of the 500 writers on this project wrote that line, and then had an epiphany. What if they went back and re-wrote the script the way it should have been written: with joy and madness and a keen love for the bizarre? “Cowboys and Aliens” could have been sort of wonderful, a masterpiece of insanity. Instead of reaching for the stars, Favreau and his team decided to stay down-to-Earth. That was the biggest mistake of all.