“The saddest thing in life is wasted talent.”

After reflecting on my time with Runespell: Overture, I can’t help but think back to this quote from A Bronx Tale. At the core of Runespell is

an enjoyable –and often, challenging- battle system that shows plenty of promise. Unfortunately, while Runespell can be very fun at times, the experience is marred by repetitive encounters, a half-baked story with terrible writing, and a curious lack of multiplayer.

Developer Mythic Box describes Runespell: Overture as “a unique RPG that combines Poker and Collectable Card mechanics.” That may sound a bit confusing –I didn’t quite get it until I sat down to play- but it really is the best way to describe the game.

What passes for a story in Runespell goes something like this; The player character, a generic-looking cloaked figure known as the Changeling, wakes up with no memories in the middle of a massive blizzard in an alternate history England. After some existential pondering, the Changeling sets off in search of answers and eventually joins in a quest to gain entrance to a fortress, Skullgrim, which is said to contain great power. However similar the plots may sound, the Dark Tower series this is not.

There are some feeble attempts at character development but the writing in Runespell is so bad that it’s almost funny. Even after realizing how awful the dialogue was, I found myself reading every single line similar to the way that some people can’t look away from a bad car accident. Also, any player that needs their stories to be fully explained and tied up with a neat little bow will come away unhappy. A spoiler warning would normally be warranted when discussing the ending of a game but in this case there’s nothing to spoil as the credits roll before the dust has even settled on the final battle. What is actually in Skullgrim? What becomes of the Changeling and his merry band of adventurers? I presume these concerns will be addressed in a sequel but pardon me if I’m not holding my breath to wait for the answers.

While Runespell’s story is woeful, the card battle system offers gameplay that is generally quite good. Combat plays out between the Changeling and an opponent using a setup that will be immediately familiar to anyone who has played Solitaire. However, in Runespell, the player must create five-card poker hands in each available slot. Completing a poker combination allows the Changeling to attack resulting in damage that corresponds to the quality of the hand. So, playing a pair will deliver a minor scrape while unleashing a royal flush causes massive damage. The player can either move around his own cards to create combinations or steal cards from his opponent that have yet to be stacked.

In addition to creating poker hands, the player must also manage his set of special-ability-granting collectible cards. The collectible cards offer a variety of enhancements such as element-based magic attacks and protection spells, melee attack buffs, and my personal favorite, lockouts, which prevent an opponent from using an ability card for a short period of time. Using a collectible card requires Rage Points which are generated by completing melee attacks with the poker hands.

Being successful in Runespell combat requires the player to manage a cycle of generating poker hands to build Rage Points and then unleashing special abilities at the proper time for maximum effect all while attempting to undermine the efforts of each opponent. The battles are fun to play and require thinking ahead in order to successfully execute a combat strategy. Fights are often extremely close and even those against lesser opponents can prove to be a harrowing experience. 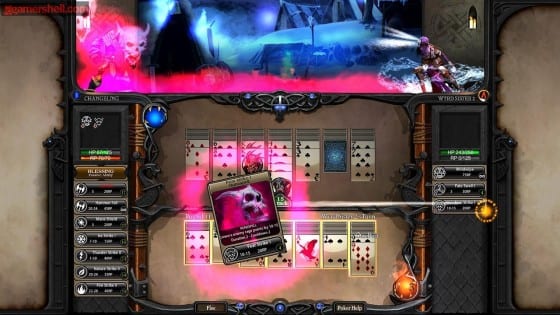 Although the combat can be very entertaining, I did note several issues with it. Encounters can become repetitive, largely due to the nature of the collectible card system. I found that there was not enough variety among the abilities, particularly the magic attacks, to warrant trying radically different strategies. The limited options also cause most opponents to have a similar card setup which further leads to a feeling of taking part in the same fight over and over. I was also bothered by the fact that the HUD does not indicate how many rounds are left on status effects and by the random ambushing –which gives the opponent the first move- that happens with greater frequency against more difficult enemies late in the game.

The last major problem I had with Runespell is the absence of multiplayer. It seems to me that this type of combat system would thrive upon the cunning between two human players. Not including multiplayer support for a competitive card game is a baffling decision.

Beyond the fun to be had with the battle system, there are several other positives in Runespell. The game is very appealing visually, particularly for a card game. The menus and HUD are all well designed and look great. Characters are decently animated in a style that apes World of Warcraft and there is a bit of special effects flair when abilities are used. One particularly nice graphical touch is the painted world map. However, the map looks so good that it creates an awkward contrast with the lame Changeling icon that gets moved around on it. The music in Runespell, although not ample in selection, does an effective job of conveying the excitement of combat throughout the game.

Blast Factor: Runespell is a curious mix of cards and fantasy elements that will likely appeal to a very narrow audience. The battle system is creative and can be quite a lot of fun to play. However, the larger issues with the game, such as the uninspired story and lack of multiplayer, make it hard to recommend for everyone, even at the $10 price point.