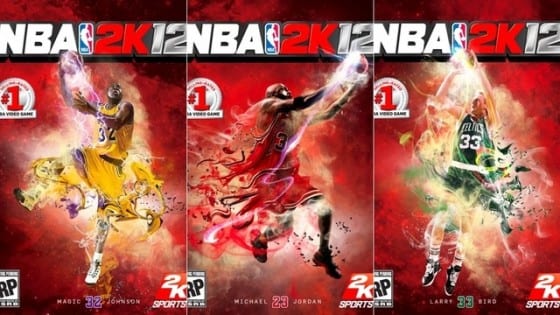 How do you top having Michael Jordan, one of if not the greatest NBA player on the cover of your last game? Easy, give us three of the best players of all time.

2K Sports has announced that NBA greats Michael Jordan, Larry Bird and Erving “Magic” Johnson will be sharing the cover duties for this year’s NBA 2K12. All three covers will be sold separately and will feature artwork from renown sports artist Adam Larson.

Bringing Michael Jordan to the virtual hardwood last year was a huge success for NBA 2K11; however, we didn’t want to stop there,” said Jason Argent, vice president of marketing for 2K Sports. “We’re bringing ‘His Airness’ back to the NBA 2K franchise as part of a multi-year extended partnership, along with two other legendary icons – Larry Bird and Magic Johnson – for a special cover athlete collection representing the NBA’s greatest heroes.”