This is second in a year-long series of articles about an American living and working abroad for a month in 12 different countries. Click here for the WorkAway RSS feed!

URSWIL, Switzerland — I’ve now been in Switzerland one week and by the time you are reading this it will probably be closer to two, maybe more. For those of you in a time crunch, use the following helpful guide to this article (free of charge):

-If you want something humorous, go to I (Animals).

-If you want information on the people of Switzerland, go to II (People).

-If you want something more contemplative, go to III (Tools). 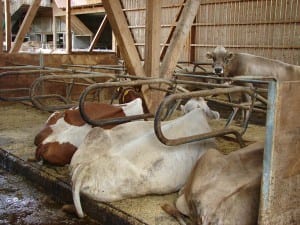 I have a wide variety of jobs on the farm, but by far the most interesting ones involve the animals. As it is a dairy farm, this means cows. Forty cows to be exact (the most of any farm in this area and a large number for a Swiss farm). My day begins and ends with these cows.

Let me say first off: I like cows. I really do. And when I heard I would be working not with just one or two, but with forty of these majestic creatures, I was, I’ll say it, overjoyed. I’ve always found them hilarious and sort of adorable. I suppose in the same way I imagine a Neanderthal child must have been adorable. At the very least, I find them interesting.

In fact, I would even go so far as to say that if you don’t like cows, you’re almost forced to at least admire them. There is a dumb endurance in their attitude, a brute and ungraceful inertia that seems to say “Yup. Here’s Life. Again,” in a way that, to my, 20-something, neuroses-riddled, over-imaginative, widely-concerned, hyper-attentive, politically motivated, liberal-arts-educated, brain sounds, well, enviable. I say all this is to make sure you, dear readers, realize what side of the (excuse the pun) fence I’m on, when it comes to cows. In the hope that you’ll be more empathetic and understanding of my predicament.

Because, despite the Mr. Hogett meets James Herriot image I had created for myself (I would, of course, feed and milk the cows, but only as a break from the deep, meaningful interactions and mutual respect we would spend our time sharing), it turns out there is really one main role when it comes to the care of these ungulates. One that overshadows the rest. One which, perhaps, best defines my current role in the universe. I start the first hour and end the last half hour of each day the exact same way. And I’m going to be pretty hard pressed to come up with enough professional synonyms for it to last me the whole section. But I’ll try.

Let me approach this from a more mathematical perspective. Imagine, if you will, a stable. Four rows of stalls (each housing ten cows) run lengthways – one along each wall and two back-to-back in one row down the middle. Each stall is separated by a small metal divider, and in the two rows between the stalls are concrete areas for moving about. The whole area is roughly 50 x 100 feet in size, not including the feeding, milking, and milling about areas, which easily add another 7500 square feet. And it is this rather massive expanse where my destination lies each morning when I wake from my sleep. It is here where I am called to task. And it is here where I have had hours of time to devote to the observation of bovine culture at its finest. If the sociologist in me attempted to describe a system of rules or ethics of cow culture based on my observations, they would come up, every time, as follows:

around/six feet tall/trying to communicate with you. Go ahead, give it a lick.

There is little I can do about the first two. However, it is for this last task that I have been trained. It is here I seek my glory. It is here where the duties of two species meet. I stand primed at the cusp of thousands of years of human evolution; centuries of progress all leading up to this moment, perfecting me for this and this alone. And so…I clean.

The whole preparation is a process as well. By 8:30 each morning I am sporting a multi-layered full body red and blue suit, water-proof green boots, and a slick pair of what look like dish-washing gloves – I look, in short, like a Ghost Buster from the 70’s. Then I get my scraper, my shovel, my other scraper, my pride…wait, scratch that, and I begin the long and tedious process of restoring order where anarchy has struck. In these moments I am many men at once. I am Don Quixote, charging at unconquerable windmills, I am a knight errant on a fool’s quest, I am a lowly monk, descending into Hell to cleanse the demons at its heart. I work with the resolve of Atlas, but the heart of Sisyphus, because I know no matter how perfect a job I do, no matter how well I clean, how faithfully I shovel, when I return in the morning, my task will await me anew, and the gods will be laughing.

And it would be one thing if the job came with some sort of thanks. Even a meaningful look, or a moo in my direction. But that’s the thing. After many, many, gregarious attempts (in English, in German, in guttural grunting) on my part to befriend these creatures, I have come to an ego-shattering conclusion: They. Don’t. Care. About. My. Existence. The thought is as destabilizing as the surfaces upon which I trod. As part of my station I had presumed a kinship with these creatures, I had thought we should find, in the filth of common experience, a shared language by which to communicate. Perhaps they would see me as one of their own. I thought, As long as they love me it will be worth it. And so I try to talk to them. Nothing. I smile in their direction. They look at me with a self-righteous indignation. 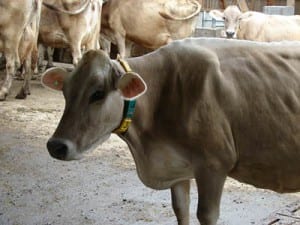 And this goes on. Day after day:

“Nice to see you,” I say. Disgusted, they move away.

“Nice weather,” I say. They relieve themselves close to my location.

It would border on an abusive relationship, if they even knew I existed.

I guess I always assumed a pretty clear power dynamic on farms. There was the farmer, the overlord, and the various animals, his subjects, which would produce for him his desired goods. A sort of more restrained Genesis 1:28. But the question of just who rules whom becomes a little less cut and dry when you’re the one trotting around dutifully with a shovel.

Nietzsche writes in his Genealogy of Morals, of Ressentiment, that unique response the “slaves” in his master-slave morality feel towards the life affirming, will-utilizing, go-getters: those that forge for themselves a reality they desire, sometimes at the expense of others. The “slaves” grit and grind their teeth,decrying the actions of the “masters” as evil. Meanwhile, the “masters” are so focused on their own lives and enjoying what they are doing that, guess what? They barely notice the “slaves” and their moralizing. So all the “slaves” think about all day is the stupid, ungodly, habits of the “masters”, while the “masters” are blissfully unaware. Sound familiar? This is, admittedly, a gross (again, excuse the pun) oversimplification. But it is an oversimplification that I live every day.

I spoke of the magic of the cows’ neuroses free existence earlier. And it’s true. In the grand cosmic scheme of things, theirs is not to wonder why. Theirs is not to discover. Theirs is not the existential dilemma. Theirs is to chew their special mix of hay, digest it in record time, show complete and utter disregard for any sense of cleanliness or tact, and then, always free from the haunting memories of the past, to do it all again, as if for the first time.

And my purpose? The process of rebuilding my fractured ego has led me to this exact question. Camus writes of the optimism of Sisyphus: how, no matter how bleak the situation, it is the freedom to choose one’s outlook that gives the existentialist’s life meaning and, ultimately, hope. I won’t be so bold as to claim the former in my current station, but perhaps, I can strive for the latter. Let me then say, here and now, with pride:

I am a scooper, I am a shoveler, I am a scraper! I beautify what others would deface! I am no more than an afterthought of the bovine collective.