This is first in a year-long series of articles about an American living and working abroad for a month in 12 different countries. Click here for the WorkAway RSS feed! 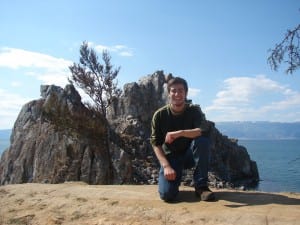 APPROACHING URSWILL, Switzerland — Switzerland, France, Scotland, Wales, Sweden, Finland, Germany, Austria, Italy, Greece, Australia, New Zealand. That’s the itinerary. With one month in each. But we’ll get to that in a minute.

This is the first time I’ve had even a second to sit down in the past three weeks, and it just so happens to be, of all places, in row 27J of an Iberia plane, some several thousand miles above the Atlantic Ocean. Or, at least I think that’s where I am. What was once a highly informative flight-screen displaying everything I would ever care to know about our current speed, distance to destination, time, and air temperature, has now become a series of advertisements for what appear to be Spanish day-time dramas- except that every once in a while, apropos of nothing, a short clip involving Will Smith appears on the screen. It is always from a different movie and never for more than thirty seconds. I have no idea why it is there, and without headphones on me, I probably never will. It is disorienting to say the least. Let us say, then, with the only quantitative information available to us, that I am 10 Will Smith appearances out of Boston, and God knows how many until Madrid.

But the strange comfort of Will Smith’s familiar face on the plane is, perhaps, the least disorienting thing to have happened in the past few weeks. In the last month, I’ve left my job teaching high school English in Baltimore, sold off most of my possessions, and said goodbye to my students, coworkers, friends, and the city I’ve called home the past couple of years. There is a weird sort of temporal vertigo that sets in, a living in the future and the past that brings an excitement about what is to come and a nostalgia for leaving that, in turn, evokes prior leavings, prior nostalgias. (Are we every really not leaving somewhere or something? Isn’t that integral to, in some sense, becoming ourselves? And isn’t this reason enough to, good or bad, cherish everything, even as we move from it, whether that be at thousands of miles an hour over a vast, strange, night-black ocean, or at the snails pace of daily decisions, changes, and loss?) It all sort of gets mixed up. And sitting here in J27, leaving behind everything that speaks of stability and comfort, I find old questions resurfacing. Questions about how many places one can truly call home, what home even is, and where it may be possible to find or recover it.

But who knows, maybe that’s all just the recent slew of vaccinations talking.

A brief word about these vaccinations.

As any good traveler knows, one should get immunizations so one’s exciting trip is not interrupted or delayed by a painful death. I received mine (the vaccinations) from a kindly woman named Amalia, who managed to combine the verbal rapidity and persuasiveness of a car salesman, the neurotic worry of a Jewish mother, and the frenetic order of a generation Y multitasker all in one body without exploding. She was awesome. Except for the fact that idle chit chat would often be interspersed, in the same whimsical tone, with litanies of the different ways in which I could die.

Me: So, what’s the worst that happens if you get Japanese Ensephilitis?

Me: (heart rate skyrocketing to 100+. She tended to have this affect on people) What? What??? Is it that bad?

A: (who, unbeknownst to me had been acting like the multitasking pro she was and checking emails while she filled out the vaccinations I was requestion.) Huh? Oh, no, just something from work.

Me: (Recovering from a 60 point pulse drop, but relieved) Oh, ok, I was worried. In that case I guess I don’t need-

A: With Japanese Ensephillitis your brain swells up until you die.

This is just a long way of saying that everything leading up until now has been sort of a preface, or, more aptly, a whole bunch of disparate prefaces, and now, for better or worse, it is more or less congealing. I’ve called this first post Introductions and Farewells and with good reason. I’m well aware that in addition to a number of people I know reading these accounts, there will be those who do not know me. So this entry serves a dual purpose. With that in mind, we’ll get to the itinerary.

Side note: This might be a good place to note that Will Smith has not appeared in a while. I can only assume that either time itself has completely stopped, or something is wrong with the TV)

August – France – Working on a farm in the south and a Green Hotel in the north.

September -Scotland – Odd variety of jobs, but living near a castle which makes any job they require me to do worth it!

November- January – Finland – Working as a dogsledder in Finnish Lapland.

February – Stopping off in Prague and then being a nomadic Shepard in the Austrian Alps for two weeks with a man named Hans! (Side note: This experience simultaneously fulfills my two main goals in life- to be a nomadic shepherd and to befriend a man named Hans.)

April – Australia – Working with injured kangaroos on an animal farm.

If you’re wondering how I’m managing to do this, I can dispel any notions right now that I am either independently wealthy, or an internationally renowned dogsledder/olive picker/farmer. I’ve set this all up through the website workaway.org, a social-networking site that is used to find and contact host families around the world (membership for 2 years is like 20 euros, but even without the membership you can still see the different hosts available) and get free room and board in exchange for whatever labor they need. Amount of work varies depending on the host. For example, in in Scotland I’ll only be working 25 hours a week and have a lot of time to explore, while in Finland I will be working roughly 18 hour days, 6 days a week.

And this, ultimately, was the way I wanted to see each place – far from the city centers, learning new skills and trades, and trying to adapt and live in the natural rhythms of each country and its people. And, of course, you’ll be able to follow along. I will post articles at least once every two weeks and more if internet connections are available. I hope that, along with documenting my attempts to learn each trade, I can capture even just a slice of the beauty of the places I’m going, the culture, and the people.

I mentioned, before, the question of how many places one can call home. Last summer, while living in Ireland, I made a list in my personal notebook of all the places I have called home. It came to 5, yet at the same time it seemed infinitely more and comparatively less. More, because of the wealth really is a of the experiences that “5” can’t begin to denote, and less, because, in some way, even in some contradictory way they are all at home in who I have become. And I suppose, sitting here in good old 27J, with the Spanish baby crying three seats in front of me, and the tired mother fast asleep across the aisle; with memories of past homes at once hazy and vivid in my sleep-deprived mind, I am reminded, once again, that home, more than any place or setting, is the people you encounter, those that you are fortunate enough to leave little bits of yourself to along the way. And this, I think, is a good thing, because there is no rock, no city, that could hold our heats as faithfully.

And so, I look forward to the people I will meet in this coming year. I look forward to leaving pieces of myself behind and picking new ones up. I look forward to, at some point, it all becoming confused and disorienting, and impossibly hard to pin down. In the end, I suppose, not too much unlike those brief flashes of Will Smith on the TV – the comfort of a face that speaks of a life I know, but one speaking what I can only imagine is Spanish or German, and both of us, (Will and I that is) hurtling through the air in a giant winged piece of metal over no continent at all. It all seems at once comforting and strange and contradictory and confusing. But I’d have it no other way.

And on that note, thank you for reading. To any new readers I do not know, welcome, and I hope you continue to follow my adventures.

To the friends I love, who I leave behind, I say only this: do not doubt that you are with me at every turn – I mark your presence in each of my movements, and it is in thoughts of you that my endless explorations, find not only replenishment, but purpose. I hope you are more than well.

To everyone, wherever you are: be safe, be happy, try, always, to be full of wonder.