DoSomething.org and Lenovo are making summer volunteering fun for teens with an 11-day Scavenger Hunt nationwide. Alison Brie and Danny Pudi, stars of the television show “Community” are supporting the project and encouraging teens to get involved in their respective communities.

“The scavenger hunt is really rooted in the idea that in the summer all teens want to do is be with their friends, be outside [and] have fun,” said Melanie Stevenson, Business Development, DoSomething.org.

Beginning July 11 and ending July 22, the hunt will encourage teens to get up and do something about the issues they are passionate about. They are competing to win prizes such as scholarships, Lenovo computers and a grand prize trip to Los Angeles for the Do Something Awards on August 14.

Lenovo is the fourth-largest PC vendor globally and DoSomething.org is one of the largest organizations in America that helps young people get involved in causes they care about. Stevenson described the relationship between the two companies as a “perfect synergy.”

“Both organizations are really all about your passion…and finding ways for you to create impact,” she said. “[Lenovo’s] marketing tagline is “For Those Who Do” and we are all about those who do as well.”

Each day teens are sent challenges that they can complete individually or with a team. Each challenge relates to issues that concern teens such as violence and bullying, education, the environment and animal warfare.

The challenges are chosen according to the most popular issues and project ideas on the DoSomething.org website. They are able to be completed in one day and can be done in teams.

While Sullivan is participating as an individual, teams of 20 are able to sign up and compete in the scavenger hunt. Teens can text HUNT to 30644 to sign up and receive challenges via text message or sign up on the website, DoSomething.org/hunt.

Currently over 10,000 people are signed up via mobile and there are around 19,000 total participants. Such a great response rate is unprecedented for DoSomething.org. Stevenson attributes this success to the prizes, celebrity involvement and the ability of teens to participate solely through text messaging.

“[This is] the first campaign that we are able to actually implement via mobile exclusively; we can do the whole contest just by texting with teens,” she said. “So that added bonus was perfect for summer participation.” 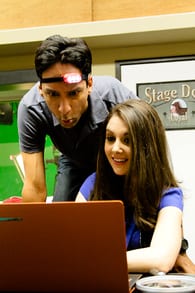 Additionally, Alison Brie and Danny Pudi are tweeting the challenges daily and the campaign has even received additional support from “Community” cast member Ken Jeong, who is also tweeting challenges.

“Teens in particular are always looking for ways to give back that make sense for their lifestyle,” said Stevenson. “They can’t always commit a full year to a project; they can’t always give money to donate to a cause. The value here is their action and their enthusiasm for a variety of causes.”

Sullivan said that she found out about the campaign on DoSomething.org’s Facebook page and although most of her friends are busy with other summer plans, she hopes they also find ways to get involved with their communities.

It is not too late to participate in the scavenger hunt. Teens have until July 25 to submit their results for the challenges; prize winners will be notified on August 1.

“If you hear about the campaign on day three or day 11 you’ll still have access to the previous days’ challenges and you’ll have a few days after the end of the campaign to complete all of the challenges with your team,” said Stevenson.

Because of the great results the hunt received this year Stevenson said they are certainly hoping to do it again next year. “It is the perfect summer program,” she said.

“I believe I would definitely do it again and maybe next year I’ll have more people [to] participate with me,” said Sullivan.