In this modern era of HD presentations and multi-million dollar budgets, we seem to have forgotten something – video games, above all else are supposed to be fun.  And call me crazy, but shooting a giant ant in the face with a bazooka is all kinds of fun.

Though the game came with an installed fan base, Insect Armageddon was never a sure bet, as it was developed by a new American team, rather than the team that made the original so enjoyable. Though some things have been changed, thankfully the heart and soul of the franchise are intact here and it’s still absurdly fun and stupidly satisfying to play – especially when busting bugs with friends.

If you’ve never experienced an Earth Defense Force game before, it’s a pretty simple equation really; run around in third person and blast giant friggin’ bugs with heavy artillery. There’s not much in terms of story or character progression, but that’s not really what you’re here for. You’re here for the mindless stupid fun that comes with being a member of the EDF. The levels are constantly over run with giant enemies, so you’re never out of things to shoot, and even when you miss, its fun as everything from buildings and monuments to trees are fully destructible. Though there’s not much depth to it, it’s easy to lose yourself in the campy action.

The biggest change from previous Earth Defense Force games is the addition of classes. Before each level, you’ll select from a number of classes with different abilities and weakness. The trooper for instance carries a shield and a large amount of health while the jet trooper has the ability to use a jetpack to move quickly across the map but doesn’t have a lot of health or armor. I’d be remised if I didn’t mention the battle armor class, which turns your soldier into pretty much a walking tank. As you progress through the game,  you’ll be able to level up and unlock new weapons and abilities, which is cool, but it takes away from the random loot you would find spread throughout the maps in past games. 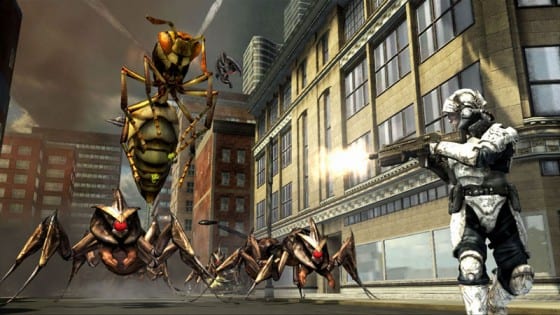 There was a bit of worry (myself included) when it was announced that development duties for Insect Armageddon would be handled by American based Viscous Cycle Software rather than the Japanese developer Sandlot. While the setting has changed from Japan to New Detroit, and the soldiers tend to scream rather than chant, it still feels like Earth Defense Force, and that’s important. To be honest, my biggest complaint from Earth Defense Force: Insect Armageddon, and I know this may come off as nitpicking a bit, is that the bugs disappear when shot, unlike previous games when they just laid around. Yeah, that’s it.

Insect Armageddon isn’t the longest game in the world, in fact, you could probably play through the game’s 15 levels in a day, but there’s much more here than just the campaign. You can play with up to three people in cooperative play via either split screen or online play.  There’s also the brand new survival mode, which strips away all of the mission structure and sees just how long you can hold out against a never ending stream of bugs. The coolest mode in the game though is unquestionably he remixed levels, which changes up the structure and enemies in a level.

Blast Factor:  Earth Defense Force: Insect Armageddon is a cheesy and (sorry for the pun) buggy affair, but looking at the history of the franchise, you shouldn’t expect anything else. Just as satisfying as you remember, Insect Armageddon is a shamelessly fun and entertaining romp, especially when played with friends. It won’t take over for your favorite shooter, but it could become your newest guilty pleasure.