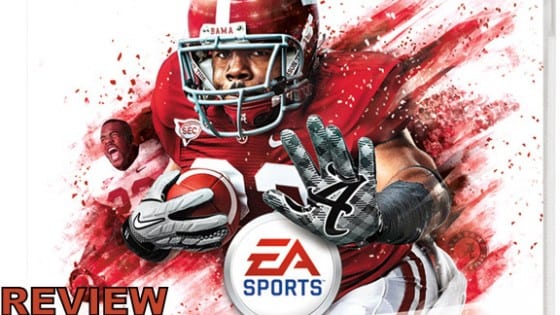 Every year, I have a very distinct way that I play the NCAA Football series. At any time I have no less than two different dynasties going. I

always start with the Wisconsin Badgers and continue my home state’s yearly dominance over winning countless national titles, but the other is a bit more interesting. I take a random small school and through recruiting and old fashioned coaching slowly turn them into a national powerhouse; then after a few years I change schools to see if I can do it again.  This usually means giving up my numbers and record and starting over, but thanks to the coaching carousel, a new feature in this year’s game, I’m able to play in one continuous game that allows me to think and more importantly react as an actual NCAA coach.

The coaching carousel mode is just one of many additions that makes NCAA Football one of the series premiere titles. Though it has its fair share of flaws and the majority of the gameplay hasn’t been changed much, there’s still much to like here.  From a slew of new presentation improvements to a notable amount of customization options, NCAA Football  2012 finally steps out from the shadow of its big brother, the Madden NFL series and it does so by celebrating the spectacle of college football and not just the product.

The addition of the coaching carousel to the Dynasty Mode is an interesting one. You start by creating your coach from style to alma matter and of course look (admittedly though there are some curious absences here. You mean I can make my coach wear a 3 piece suit but can’t give him a 60’s era hat?) and then you pick your first coaching job. Where you go and what role you take will have a massive impact on your experience: pick an offensive or defensive coordinator and you’ll only have control over that side of the ball; but if you pick a head coach you’ll have control over the entire team. At the beginning of each season you’re given a set of goals and these are how you’re judged at the end of the season. Once your contract runs out you’ll have the option to stay with your current team (if they don’t fire you) or testing the waters otherwise.  It’s an interesting twist and a brand new way to look at a mode that had become somewhat stale in recent years.

The mode isn’t without its flaws though. Key among them is the fact that regardless of what position you choose, you’re going to be responsible for the entire team’s recruitment process, thus giving you pretty much the same responsibilities and making the feat of getting a head coaching job seem that much more trivial. What’s more, it’s entirely too easy to pull of the game’s biggest feat – landing your “dream job.” Simply create your coach and set his alma matter to whatever team you want, then make him the head coach of that school, and you’re in (interestingly enough it’s also a way to get a 30 point achievement on the Xbox 360).

Coaching carousel isn’t the only notable addition to Dynasty mode as for the first time ever you’ll be able to change around divisions and NCAA rules to your liking. The impressive customization suite was included as an answer to last year’s talk of super conferences and a dramatic realigning and is a college football fans dream. Want Norte Dame to play in the Big Ten? Go for it. Want to move a small southern team into the SEC to play with the big boys? It’s all up to you.  What’s more, you can even change bowl bids and where the bowl games happen. For instance, you can make the winner of the SEC and the winner of the Big Ten play each other in the Orange Bowl if you’d like.

Another mode that’s grown stale in recent years but given an overhaul in the 2012 game is the Road to Glory mode.  The mode, which puts you in control of one single created player now starts you back at the beginning of your senior year of high school (teams are either automatically created or you can import them using the impressive team builder). Once you choose which school you’ll be playing for, the game becomes almost more like an RPG as you’ll earn experience points to level up your player through in game play and mini games like practice performance. While you’ll start as a simple backup, you’ll eventually work your way up to becoming a trusted starter that can call his own plays and audibles at the line.

As you’d probably expect, save for a few new animations and tweaks, not much of the game’s core gameplay has been changed from last year’s installment. Unfortunately, this includes a few key elements that desperately needed tweaking. Some of the game’s physics are still a bit strange (there were several times where the ball went directly through my receiver), and the AI still has a tendency to become unbelievably good towards the end of the game especially when trailing. Come on, it’s a bit strange when you’re dominating for three and a half quarters only to have the other team suddenly become experts at interceptions and sacks.

Not all of the game’s tweaks are of the gameplay variety though, as the game features an updated presentation aspect this year.  Key among the updates is the stadium specific introductions. While not all teams have big introductions, the key ones are here like Florida State’s Chief Osceola and Renegade running on to the field and the LSU Tiger. They’re great to watch the first few times, but what about the rest of the game? If you’re going to capture the true spirit of college football, why not do something special for the end of the game?  Why does it feel the same when I beat a no name opponent as it does when I upset a top ranked team? Also notable is the fact that the game’s crowd noise has been improved dramatically and you no longer get the feeling like you’re listening to 50 fans amplified to sound like 100,000 fans; you’re actually listening to the right amount.

Much like the gameplay however, the game still suffers from some of the same visual flaws that have haunted the series for years. At random times half of players will vanish and the ball will completely go through whole objects. The new presentation aspects are great, but I almost would have rather had them wait on those until they fixed these lingering problems.

Blast Factor: Though it has its fair share of flaws, NCAA Football 2012 is easily one of the best of the franchise. With its new customization suite and revamped modes, college football fans are sure to find enough to enjoy for some time to come – or at least until next year’s game releases.