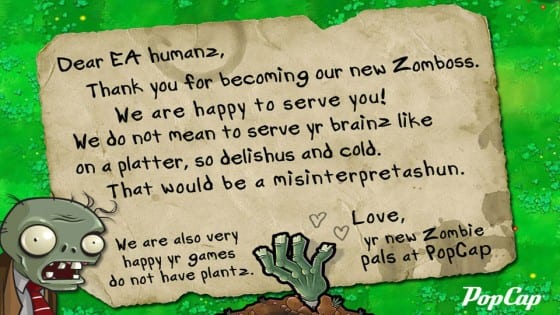 Electronics Arts has announced today that it has purchased developer PopCap Games; most famous for cult favorite games like Plants VS Zombies, Bejeweled and Peggle. Though specifics of the deal are expected to be announced during a conference call scheduled for later tonight, it’s expected that the EA could be ponying up more than $750 million in cash and stocks.

It’s been hinted at over the last few weeks that someone was interested in buying the indie developer and rumors suggested everyone from EA to Activison.

“We picked EA because they have recast their culture around making great digital games,” said David Roberts, CEO of PopCap. “By working with EA, we’ll scale our games and services to deliver more social, mobile, casual fun to an even bigger, global audience.”