Crossovers continue to remain a popular option for providing the “higher-stance-on-the-road-feel”, with car like interiors and that extra space for random weekend runs that require a bit more space than a standard trunk. The second generation Outlander received an overdue facelift and interior redesign with the 2010 model year to make it not only a good looking CUV but with the features to fit right in with the more popular choices of it the class. 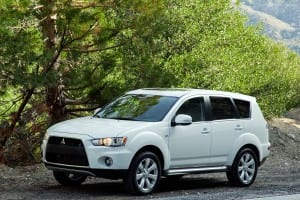 The Mitsubishi Outlander is offered in six trims; ES, SE, SE AWD, XLS 2wd V6, and the one we tested, GT S-AWD. Our vehicle stickered at $30275, but pricing starts at $21995. Each Outlander comes with a 5 year, 60k miles, bumper-bumper warranty with 5 years unlimited roadside assistance and a 10 year 100k power train warranty. Four star rollover crash rating from the NHTSA, dual front and side mounted airbags, and Hill Start assist (to name a few safety features), ensure you will be safe traveling in any condition the weather may present. Our GT S-AWD was powered by a 3.0-230hp V6 with 215 lb ft and a 6-speed automatic transmission that manages 0-60 in less than 8 seconds for those who may feel the need to be off the line first with 23mpg in the city and 28mpg on the highway. The v6 was paired with the idiot proof AWD system that provided road gripping capabilities during one of our daily Florida monsoons (and would make driving in much nastier weather less stressful). Handling was not shabby with the stiffer characteristics one would expect from a larger SUV yet with car like comforts. The only room from improvement on the Outlander would be the tire noise that occurred at higher speeds due the Goodyear’s paired with the suspension that just didn’t mesh well together. The Outlander GT S-AWD has the same front fascia as the current Mitsubishi line up with the oversized wide mouth grill, sleek headlights paired with Xenon lights, chrome accents and rear LED lights making for a good looking CUV compared to other boxy options in its class. 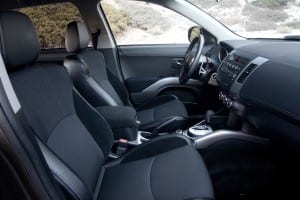 Our Outlander GT S-AWD’s offered a sporty black cloth interior with aluminum accents that gave just enough of a polished look to really contrast with the massive plastic amounts most interiors have. The aluminum is carried to the pedals but an optional interior sport package ($295) would provide a matching shifter knob and brake handle, which I think would make more sense to be included as part of the GT trim line to provide continuity rather than as an option. Seating provided comfort to both front and second seats however the lack of a driver front seat was somewhat disappointing in this price point, but is featured along with heated front seats in the Touring package ($2700). Both front and second row provide firm yet comfortable seating, more than expected leg room with second row to seat two adults in comfort. The third row rear seat produced immediate excitement from my little guys; however if you are over four feet, the excitement will be lacking. One negative aspect to the third row is the lack of air vents in the rear seating area, so air flow isn’t great. And the cheap look and feel to the third row seat left something to be desired. Cargo space is not an issue, even with the third row in use. There is more than enough room behind the seat due to the deep cargo area, which offers access with either just the rear hatch lifted, or for larger items, there is a drop-down tailgate. The only cargo issues were my inability to completely stow the third row flush, despite my numerous attempts by reading their step-by-step picture directions. The second row seats didn’t compact as much as they should when folded either, so maximum cargo space was compromised. But overall, space in general is not an issue – it’s plentiful. 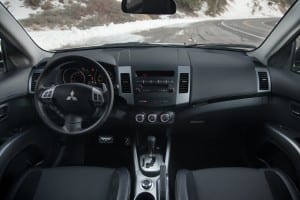 Along with basic standard equipment, there were extras that ranged from heated exterior mirrors, rain sensing wipers, Fast Key entry, Sporttronic Paddle Shifters and a radio that came equipped with an AM/FM/6CD/MP3 in-dash audio system, with six speakers and a large yet basic display. Our Outlander GT S-AWD came with the optional Sun and Sound package ($1700) that provided us with a power glass sunroof, Sirius radio and the best part, a 710W Rockford Fosgate Punch premium sound system with 9 speakers and a 10-in subwoofer – to which I indulged my love for Led Zeppelin on numerous occasions with much satisfaction (and also to help drown out the noise from the tires at higher speeds). Standard on every Outlander is the Fuse Handsfree Link System with steering mounted controls, but much like the folding of the rear seats, the syncing to the Bluetooth provided to be an eyelash pulling process. In other words, I just gave up on syncing my Droid after numerous attempts. A simpler process would not only please those like me who find technology at times to be more of a burden then a necessity, but also those who simply lack patience. The only other option available is Navigation ($2000) that provides a rear camera, including a 40 gig hard-drive, music server, real-time traffic and an auxiliary input.

Despite the road noise that could be an easy manufacture fix and the unappealing construction of the third row seat (also another easy fix); the Outlander GT S-AWD determined this is one CUV that shouldn’t be looked over.  You just may “go where you haven’t gone before” behind the wheel of this competitive option.