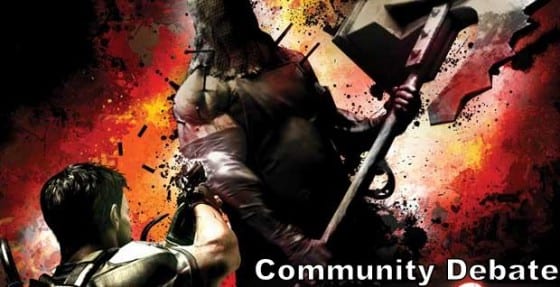 Welcome to a new feature here on Blast, the Community Debate, where we all debate the hottest stories in gaming. To start us off, Capcom’s somewhat shady tactics with it’s new 3DS title; Resident Evil: The Mercenaries 3D. the background:  It was discovered this week that the game features undeletable save files. So, once you start a game, you can no longer start over.

While Capcom states that the move was not meant to stop second hand gaming, they it seems awfully fishy and retailers are showing mixed plans on how to deal with the game. UK retailer HMV will not be taking any trades on the game whatsoever. Gamestop originally said they wouldn’t be taking the game in, but has since changed their mind. “”GameStop did ask the US store base to stop accepting trades on Resident Evil: The Mercenaries 3D as we evaluated the save system for the game,” said the company. “Upon further review of the process with our publisher partner, Capcom, GameStop will resume taking trades on the game effective Wednesday, June 29.”

So, what do you guys think? Is Capcom playing fair? Or are they merely protecting their bottom line? Is the industry over reacting to the used games community?

We want to hear you — debate!