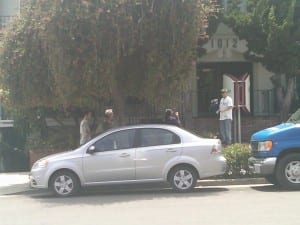 A tourist in a Red Sox jersey poses for a photo in front of Whitey Bulger's apartment. (Kristen Gard for Blast Magazine)

SANTA MONICA, Calif. — As you walk down 3rd Street, between California Avenue and Washington Avenue, it’s just like any other neighborhood. A man sporting Nike sneakers and headphones jogs down the street, while a couple bikes by. On the sidewalk, a grandfather pushes a stroller while his wife, daughter and daughter’s young child follow behind him, and a neighbor grabs a package from her front stoop. Across the street, a man is hosing down the sidewalk, a UPS truck is delivering packages, and an Arrowhead Springs truck is delivering water. For all intents and purposes, this appears to be a busy, normal neighborhood.

But on Wednesday, former mob boss James J. “Whitey” Bulger was found here, along with his longtime girlfriend Catherine Greig. Inside the apartment authorities found $800,000 and later hauled bags labeled as containing weapons, and ammunition out of the apartment.

Bulger had been on the lam for 16 years and was arrested for his alleged role in 19 murders. He was an informant for the Boston FBI. Later, he made the FBI “Ten Most Wanted” list next to Osama Bin Laden.

As news crews swarmed the neighborhood, neighbors appeared intrigued but reserved regarding Bulger’s presence in the apartment complex. One man on his phone boasted to his friend that he had “ridden by him on my bike, I’m sure I have.”

When asked directly about the mob boss, however, numerous people claimed ignorance.

A woman and her daughter, visiting from San Francisco were vacationing across the street from the three-story apartment building. “I’ve been following it on the news, but I had no idea this was happening right across the street!” she exclaimed, before giving her young daughter a brief description of the mob boss.

None of the residents we spoke to would allow their names to be published out of fear for their safety.

While residents of the area went about their routine, tourists were taking advantage of the historic event. Starline Tours briefly stopped in front of the apartment complex. Some cars slowed as they passed, while others stopped altogether capturing pictures on their cell phones.