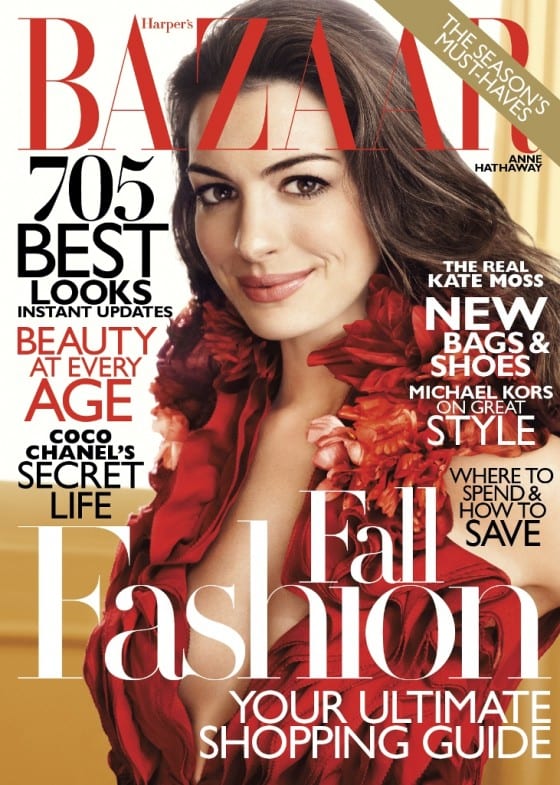 Anne Hathaway graces Harper’s Bazaar’s August cover, on newsstands July 12, and in the interview, the star opens up about love, career, fashion, her upcoming movie, One Day, and responds to James Franco’s comments about co-hosting the Oscars with her.

Hathaway talks about co-hosting the Oscars and responds to James Franco’s comments: “How did I take it?” she says mildly about Franco’s comments on Letterman. “I let James know that a whirling dervish is a more ?attering comparison than a Tasmanian devil. I called him, and we e-mailed a bit.” “In the grand scheme of things, I got to have a once-in-a-lifetime opportunity. I met great people, wore beautiful clothes. And I got to put on a show. I don’t see a downside. Anyone who disliked my personality probably disliked my personality before the Oscars.”

Talking about fashion, Anne says she “feels like the luckiest girl in the world when I get to wear all these glamorous clothes,” but away from the red carpet, she is decidedly more moderate: “I’ve become a lot more specific about what I love and why I’m doing it,” she says.

On her boyfriend, Adam Shulman: “So far, it’s worked out great,” she says matter-of-factly, observing that she used to get caught up in the intensity of a romance. “Which has its wonderful side, of course,” she adds with a half shrug, “but also it was exhausting, and sometimes it would freak me out. Mellow doesn’t always make for a good story, but it makes for a good life.”