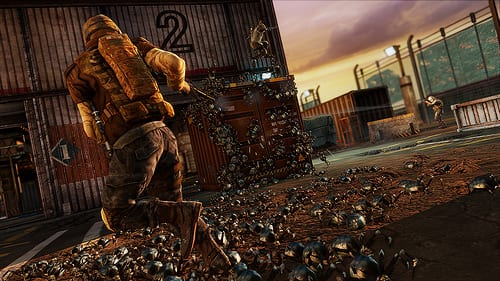 UPDATE: The First round of codes has been given out, check beck tomorrow for more!

The Uncharted 3 multiplayer beta kicks off this coming Tuesday for everyone with a PSN Plus account (which should pretty much be everyone, you did sign up for that free month of PSN Plus service as part of the welcome back program right?) as well as those who bought Infamous 2. New features include new cinematic moments, new hero and villain skins and tons more. What could be better than that?

How about being able to turn in to a giant swarm of bugs?

Blast has twenty codes to dish out for the Creepy Crawler Kickback, which allows you to turn into a swarm of bugs and attack your enemy. How cool is that? Want one? Just comment on this post and we’ll pick the winners at random on Monday. You can comment as many times as you want, but you’ll only be entered once.

Be sure to check back next week for our report of going hands on with Uncharted 3 and sitting down with the game’s director Justin Richmond.

Oh, and I’ll also be giving away some randomly on my Twitter @JoeSinicki, so follow me and keep on the lookout!