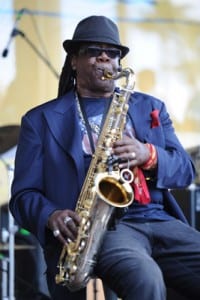 Clarence Clemons, the saxophonist on Bruce Springsteen’s classic albums, died on Saturday at a Palm Beach, Fla. hospital from complications from a stroke. He was 69.

Clemons suffered the stroke on June 12, according to a Springsteen spokeswoman. Initially, reports said that Clemons was recovering well, but the Rolling Stone reported that his condition worsened late in the week.

“Clarence lived a wonderful life. He carried within him a love of people that made them love him,” Springsteen said in a statement. “He created a wondrous and extended family. He loved the saxophone, loved our fans and gave everything he had every night he stepped on stage. His loss is immeasurable and we are honored and thankful to have known him and had the opportunity to stand beside him for nearly forty years.”

Clemons played famous solos on songs such as “Born to Run,” “Jungleland,” “Badlands,” and “Dancing in the Dark.” He and Springsteen have been playing together since 1971, when they played clubs on the Jersey Shore.

“He was my great friend, my partner, and with Clarence at my side, my band and I were able to tell a story far deeper than those simply contained in our music. His life, his memory, and his love will live on in that story and in our band,” said Springsteen.

Clemons latest sax work was with Lady Gaga on her recently released video, “Edge of Glory.” His final performance was with the singer on the season finale of American Idol. He also worked with such music greats as Ringo Starr, Aretha Franklin and the Grateful Dead.

Clemons was the oldest member of Springsteen’s accompaniment and had suffered multiple knee and spinal surgeries in the past few years.

Married five times, Clemons is survived by his widow, Victoria, and four sons.