The Arab Spring has turned the eyes of the world to its remaining dictators. We’ve watched them publically flounder, grasping desperately at the myths of divine right and public support constructed over decades, while simultaneously ordering tanks and troops to crush all opposition without distinction or mercy. Hoping we’re witnessing the beginning of the end of the military despot, we’ve been mesmerized watching these once charismatic tyrants exposed and vulnerable. 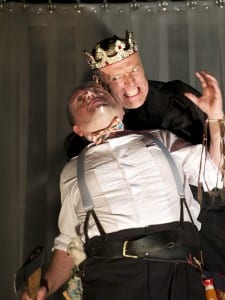 Shakespeare wrote about this. “Richard III,” is thought to be one his earliest and most popularly successful plays.  It’s title character uses smirking soliloquies to make us his accomplices as he charms and butchers his way to the crown, goes mad trying to hold on to the reins of power and swiftly loses what he so audaciously claimed. It’s the perfect play for examining the methods, motivations and madness of such men, but also our own fascinations with them.

One could not ask for a more compelling, inventive or effecting production than the one on offer from England’s award-winning Shakespeare troupe, Propeller , now playing at the Huntington. While Richard Clothier’s broad-shouldered, toothy-grinned, fast talking sociopath is an imposing and magnificent Richard III, but it’s equaled by the portrayal of the machine he comes to oversee.

Propeller’s English royals drink their celebratory wine from i.v. pouches and when they’re vowing a pact of loyalty, they down vials of one another’s royal blood. A chorus of underlings who are masked in ragged bandages and costumed in hospital whites does their bidding. Models of British efficiency, these ghouls sing jaunty English hymns in four-part harmonies as they carry out their orders with drills, hooks and chainsaws. This business is creepy as hell, but its horror and gore is so over-the-top as to be campy. An intentional gallows humor makes it palatable and even entertaining.

You never forget you’re in a theatrical world in this Richard. For one thing, Propeller, like the King’s Men, is an all male troupe, so you’re treated to a drag Lady Anne and Queen Margaret. These parts, however, are not played for camp. In the very best scenes, you forget.  For another thing, you get surprising turns like the use of puppets to portray the young princes whom Richard imprisons in the tower. They effect is both convincing to the imagination and useful as commentary.

The trick of Richard III is that it has no likable characters, only amusing characters. In the Propeller version, this even holds true for Edward, the play’s liberator, whose violence in the name of freedom for tyranny has to give us some pause.

Directed by Edward Hall, adapted by Edward Hall and Roger Warren and designed by Michael Pavelka, “Richard III” is presented by the B.U. School of Theatre in association with the Huntington Theatre Company. It plays at the B.U. Theatre through June 19, in repertory with “Comedy of Errors.”